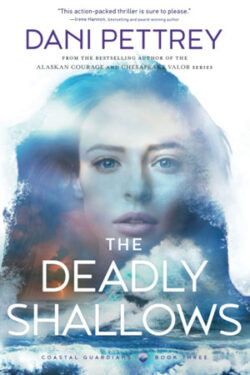 Brooke Kesler, a Coast Guard Flight Medic, is excited to watch a young friend she has been mentoring graduate as a flight medic. However, during the graduation ceremony, all hell breaks loose. Gunmen enter the ceremony and begin shooting at random.

Noah Rowley, a Coast Guard Investigation Service Agent, is notified immediately of the crime taking place. He and his team run to breach the scene to help any victims and capture the gunmen. He is rocked when he learns Brooke is in attendance. His feelings for her run deep, and he’s afraid she’s been injured. But he has a job to do and needs to focus on that…praying she is okay.

When the shooting ends, there’s carnage everywhere. Brooke sees so many people injured and provides first aid as best she can. She soon discovers her friend has been gravely injured. One of the shooters has also been injured, and Brooke is tasked with providing medical aid to him as he is taken by helicopter to the hospital. During the trip, he murmurs a word to her which makes no sense but because of the severity of his injuries, she assumes his mind is just rambling. But this one word will put her life in danger.

This is the beginning of THE DEADLY SHALLOWS, and it takes you on one heck of a ride. You quickly become immersed in the story that is action-packed from beginning to end. I was so caught up in the book, I couldn’t put it down until I reached the end.

Dani Pettrey is an author who creates compelling characters anyone can relate to and puts them in situations that as a reader, you become so involved with, you forget everything else around you. You cheer for the good guys  and can’t wait to see the bad guys get caught. This is a great read!