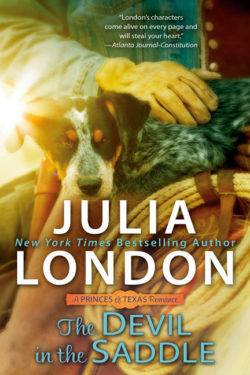 THE DEVIL IN THE SADDLE is only the second book I’ve read by Julia London, but it won’t be my last. I thought she only wrote historical novels but was pleasantly surprised to find out she also writes contemporary romances.

Since this is the second book in the PRINCES OF TEXAS series, I do plan to read the first book in the series just to get some of the back story. I didn’t feel lost not having read it, but it might have filled in some of the why the characters act the way they do.

The Princes are a powerful family in their small town in Texas and own the Three Rivers Ranch. When the dad, Charlie, dies suddenly, they find out that although they are still wealthy, they’re not as wealthy as they thought due to his gambling debts. The three adult children, Nick, Hallie, and her twin, Luca, are featured throughout the book, but this is Hallie’s story.

What does Hallie want to be when she grows up? She hasn’t finished college and didn’t become the prima ballerina she expected to be. It does take her most of the book to figure that out. Her best friend is Rafe, who is the son of the ranch’s majordomo. While there’s an attraction between them, he knows better than to pursue it. Or at least, he tries not to.

The story flows smoothly for the most part but does hit a few snags. Cordelia is Hallie’s mom and Charlie’s estranged wife, although she forgets that as she mourns him. Rafe’s mom, Dolly, is a hoot and definitely says what’s on her mind. The scenes at the family cemetery on the ranch definitely gave me a few chuckles.

Hallie’s ex-fiancee keeps trying to worm himself back into her good graces and leaves a lot to be desired. As the story progresses, we get to know both Rafe and Hallie better but also his family as well. The romance is well-done with lovely closure. I liked that there were a couple of chapters from the next book in the series, THE BILLIONAIRE IN BOOTS, that whet my appetite for more.