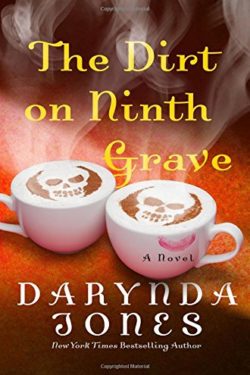 THE DIRT ON NINTH GRAVE by Darynda Jones is a paranormal story about a girl with no memory who ends up in the small village of Sleepy Hollow, New York.

Charley is living as Jane Doe, since she was found in an alley behind the diner where she now works. The owner of the diner takes her in after Charley is released from the hospital diagnosed with a concussion and amnesia. While working at the diner, she slowly begins to realize that she sees dead people. The lady she works with named Cookie seems to think she knows who she is and calls her Charlie. She changes her name to Janey Doer just to be different. Janey can tell that people are telling her half-truths and lies but can’t figure out why. Janey also senses a dark force that wants to do her harm. The handsome-as-sin fry cook is keeping an eye on her as well. Janey can understand other languages which makes her think she is a genius.

As things start to come back to her, she realizes there is an evil person who was sent to kill her. Throughout the book she is trying to find out who she is and why she ended up in the alley.

I never figured out how the book title related to the story. THE DIRT ON NINTH GRAVE has a surprising conclusion fitting for the story.