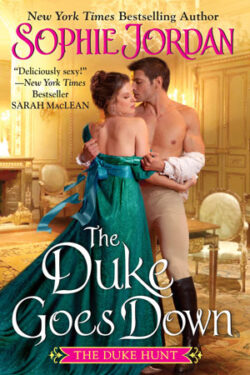 Peregrine “Perry” Butler, the Duke of Penning, once lived a charmed life. When the truth of his birth is revealed, he loses his title, his wealth, his lands, and his dignity. Perry searches for a rich heiress to wed. However, nasty rumors keep him from reaching his objective. Perry demands the perpetrator, a certain vexing spinster, to restore his reputation. Can Perry learn to let go of his former life? Will he find a new purpose for his future?

Imogen Bates is the spinster daughter of the shire’s aging vicar. She views Perry as the bane of her childhood. Imogen protects the heiresses of her community the only way she knows how, by spreading malicious rumors about his person. Now the infuriating man hounds her to restore his honor. And tempts Imogen with pleasure. Will Imogen eventually do right to Perry? Can she see the true man beneath the polished veneer?

I really could not stand Perry as a child.  He was such an irksome brat, who desperately needed a spanking. I like that karma finally caught up with him. The change in his circumstance allowed him to do some much-needed soul-searching. What I admire the most about Perry is how he figured out a life path for his future. He first had to come to peace with losing his former life as a nobleman. This allows him to understand the satisfaction of earning his rewards through hard work and not from inheriting it.

I only have two problems with Imogen. The first is her inability to let go of the past. I understand how hurtful and devastating it can be to have people badmouth you, but that does not excuse Imogen’s behavior. The second problem I have with Imogen is her penchant for spreading gossip. It is never okay to spread damaging rumors about a person, no matter how they behave towards you. For all Imogen’s faults, I admire her loyalty to her father and to her community. She does what she can to help all of them.

THE DUKE GOES DOWN is the first book in Sophie Jordan’s brand-new historical romance series, THE DUKE HUNT. I am new to this author’s works. The hero’s situation is what attracted me to this book. It is something I have never heard nor read about happening to anyone in the peerage. Except for a few nitpicks here or there, I quite enjoyed the story, enough to finish the book in a day.

THE DUKE GOES DOWN is a fascinating tale of two adversaries learning to forgive their pasts to forge a future together. I cannot wait to meet the mysterious new Duke of Pennings.