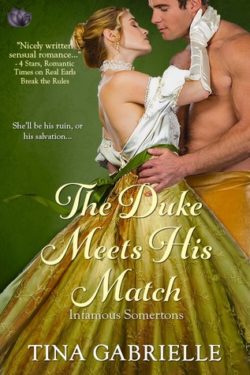 Michael Keswick is the Duke of Cameron. He is titled, handsome, and scarred. To keep himself distracted, he takes on the care of Henry, his best friend’s son. Henry, it seems, needs a bit of advice in the area of women. This was an area Michael was familiar with and it also provided a respite from the demons that haunted him. Keeping Henry away from Miss Chloe Somerton shouldn’t be any problem at all.

Chloe Somerton longs for a home and a family. Her sordid past, however, is a constant presence thanks to Michael Keswick, one of the few people who know what she has done. Despite all her efforts, she is not able to convince Michael that she is not the person he perceives her to be. Henry is very fond of Chloe, though, and Chloe is not going to let anything get in the way of that.

The battle lines have been drawn and neither Michael nor Chloe are ready to stand down and surrender. Chloe thinks she is going to win until Michael offers her a deal she would be a fool to refuse. She is no fool, but this is a proposition she doesn’t think will end with her being a winner.

Tina Gabrielle has crafted a beautiful story around a condition that, while went nameless during the story, is very familiar in the world of today – PTSD. Tina shows how war ravages the minds of those who served and survived to live their lives in a constant battle to maintain normalcy. For anyone who has loved someone with PTSD, they can relate to the struggles faced in this tale by all those involved.