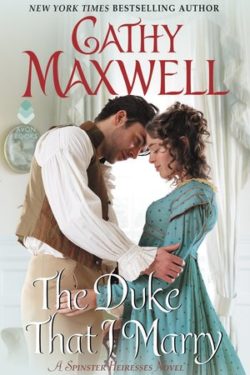 THE DUKE THAT I MARRY by Cathy Maxwell is part of a trilogy written about three spinster heiresses but is also a great standalone book. The story concentrates on Matthew Addison, the new Duke of Camberly, and his soon to be wife, Willa Reverly, an heiress with no title but lots of money. As the story opens the reader finds Matthew still at home when he should be in London getting married and learns why he must marry the heiress. Matthew almost loses his chance to marry Willa as she has decided that he’s not really interested in marrying her and she doesn’t want to marry someone who is going to ignore her. Matthew is able to get a second chance with Willa and finds he can trust and confide in her. Willa is a little headstrong but is a great help and wife for Matthew. Matthew and Willa find themselves falling in love as they become involved with what has happened to the money that Matthew’s estate should have had. Throw in her father, his grandmother, his sisters and a few good friends and you get a good adventure story with a surprising ending and a HEA.