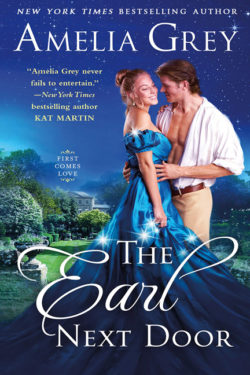 THE EARL NEXT DOOR is the first book in the FIRST COMES LOVE series and the first book of Ms.Grey’s I’ve read. That will have to be remedied as I have put a few of her books on my always growing TBR pile!

Adeline is the Dowager Countess of Wake, having lost her husband when a ship sank two years ago. She is feisty and seems to have met her match with her neighbor, Lord Lyon. She never wants to get married again due to her disastrous first marriage, and he refuses to marry until he falls in love. But whenever they meet—often and not always under the best of circumstances—sparks fly. They seemed to have reversed roles for the time they live in since she wants no ties while he does.

She and several of her friends, who are also widows, have started a boarding school in her backyard for girls to learn a trade to better themselves. All the girls lost their fathers in the same boating accident in which the widows lost their husbands. Things get interesting quickly as the girls are louder and more rambunctious than expected, which adds to the story.

We also meet Lyon’s father and aunt, plus the servants along with those running the school. The author uses vivid descriptions of the setting to transport the reader to historical England. The characters’ interactions are often lively and entertaining.

THE EARL NEXT DOOR was fast-paced and held my interest, but there wasn’t the depth I was expecting. I liked learning of the friendship between the widows, as well as the way it was realistically portrayed. There were some loose ends, even with the epilogue, that I hope will get tied up in one of the next books in the series. I look forward to reading more in this series and reuniting with the characters as they each find love.