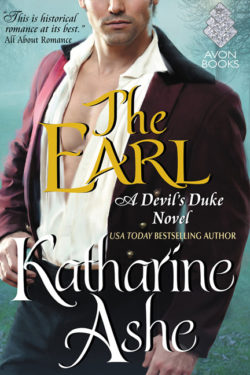 Colin Gray, the Earl of Egremoor, was previously known as Peregrine to those he dealt with as the leader of the Falcon Club. He has long had a grudge against Lady Justice but believes that the author of the pamphlets is a man, not a woman. When Lady Justice asks for his help to find her sister, Colin finally gets her to agree to meet him face-to-face as a stipulation, but he is sure the woman who meets him is not Lady Justice. In fact, he knew the woman, Emily, many years ago when they were growing up. To unite Colin’s family and Emily’s, she, as a baby, had been promised to Colin in marriage. As a boy, Colin had only one friend, the younger Emily, but at thirteen, his friendship with her ended and they went in different directions. However, Emily feels like he deserted her. Still, he does agree to look for Lady Justice’s sister, hoping to finally draw out the real Lady Justice, a man.

Emily Vale, aka Zenobia, is now known as Lady Justice and she hasn’t seen her sister in many months. Frantic, she contacts Peregrine since the Falcon Club’s mission is to find people. For years as Lady Justice, Emily held only disdain for Peregrine, and has held a scathing, public feud with him through the presses, while fighting for the downtrodden. But she has no idea of Peregrine’s true identity. At an arranged meeting, she is aghast to learn who he really is, but she manages to keep her own identity secret. Still believing that the pamphleteer is a man, he agrees to find Lady Justice’s sister.

Subsequently, a letter from Scotland sends Emily there and she runs into Colin at an inn. Mistaken for two thieves/murderers who have been working the area, they find themselves on the run across Scotland. Forced together, they must learn how to trust each other and the more time he spends with her, the less he wants to live without her. Can these two with such a contentious past find happiness together?

Finally, the story of Lady Justice and Falcon Club’s Peregrine! USA Today bestselling author Katharine Ashe has penned a winner with her latest novel, THE EARL, the second book in her DEVIL’S DUKE series. Up until the age of thirteen, Colin had been unable to speak. Estranged from his father due to his speech problem, Colin endured much, even from his classmates. His one friend, Emily, became his voice. However, when he left at thirteen, Emily felt betrayed. Now she seeks justice for all the less fortunate and has a rigid moral attitude, wanting nothing to do with Colin, despite how infatuated those around her are with him. I really liked Colin, but there were moments when Emily seemed a bit too cold and calculating to me.

Surprising plot twists, adventure, humor, passion, mystery, snappy dialogue, romance and true love combine for a tale that is a must read for fans of historical romance. I have enjoyed all the books in Ms. Ashe’s FALCON series and this one seems to be the fifth and last in this series, as well as being part of another collection. Each of the books can be read as a standalone, but for additional entertainment and to understand how the characters relate to each other, I advise starting from the beginning. I am sure you will enjoy them as much as I did.