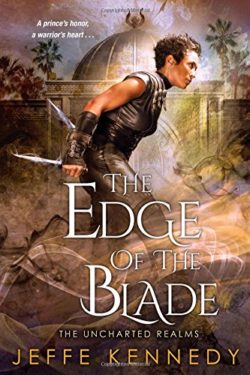 Imperial Prince Kral is the second son of the Dasnarian Empire. He is also the Empire’s General, a position without any true power and beholden only to his emperor brother.  Kral agrees to escort Jepp to his country as the Thirteen Kingdoms’ representative. The woman’s boldness and warrior mannerisms incite his blood. Kral fears the trouble Jepp would encounter in his brother’s court, and so he strives to teach her on how to comport herself as a proper Dasnaria female. Will Kral defy his royal brother to keep Jepp safe? What lengths is Kral willing to go for Jepp’s safety?

Jesperanda im Kaja, Jepp to the Hawks, is High Queen Ursula’s best scout and hunter. She travels with General Kral to Dasnaria as the Thirteen Kingdoms’ impromptu ambassador. The envoy role is a cover for Jepp’s true mission. She refuses to adhere to Dasnaria’s chauvinistic outlook on a woman’s place. When the Imperil Emperor banishes her from his court, Jepp takes the opportunity to skulk around the palace. Can Jepp achieve her mission without getting killed? What truths will she learn deep in the Imperial Palace?

It did take me a while to warm up to Kral. His chauvinistic mindset, a product of his country and upbringing, annoyed me. I love how Jepp’s constant challenges gradually changed Kral’s outlook and opinions on a woman’s place. Her subtle influence helps him open his eyes to another’s perspective. But, what I like the most about Kral is his willingness to give up everything to keep Jepp from death.

I like Jepp. She reminds me of the kind of character normally found in a Dungeons and Dragon novel. Jepp is an obstinate, sexual creature who knows her own mind and limitations. She accepts her many shortcomings, yet Jepp does not allow them to hinder the job assigned her. I adore how Jepp repeatedly challenges Kral and his people’s set opinions on a woman’s purpose and duty. I love that she remains true to her nature and refuses to be something she is not.

THE EDGE OF THE BLADE is book two in Jeffe Kennedy’s fantasy-romance series, THE UNCHARTED REALMS, a spinoff from her THE TWELVE KINGDOMS series. Sadly, I have not read the first book, so I felt a little lost at the beginning of the story. I suspect the first book covers Jepp and Kral’s first meeting and their rocky interactions. The story starts out slow but gradually picks up momentum.

THE EDGE OF THE BLADE is a fantasy tale of two like-minded people managing to overcome their cultural differences to be together. I am happy that Jeffe Kennedy decided to return to this beautiful world of hers with all new stories. I cannot wait for the next installment in this series.