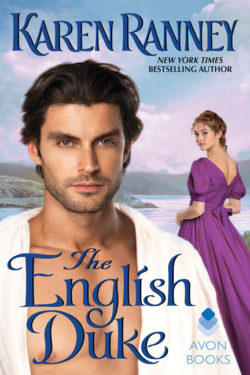 I enjoy historical romances, especially those set in England and Scotland. Yet this is only the second book of Ranney’s I’ve read, the first being THE SCOTTISH DUKE in the DUKE TRILOGY series. I plan to rectify that and will be adding some of her historical and contemporary romances to my always growing TBR pile!

THE ENGLISH DUKE, book 2 in the trilogy, did not disappoint. There are many multidimensional characters as well an heiress who always had to get her way, her sister who enjoys spending time perfecting her father’s inventions (now that he’s dead but loved following him around and working by his side), and a Duke whose home needs an infusion of funds.The two palatial homes and beautiful grounds and workshops were vividly described and made me feel like I was there.

Spoiled Josephine always had to get her own way or else, and those situations are not pretty. She has lots of secrets and is more forward and free with her affections than her grandmother knows. Martha is more laid-back and has a very scientific mind. She and her father always tinkered together in his cottage, and after he died she carried on his work.

When they meet Jordan, the Duke, the reactions of both Josephine and Martha are not only totally different but speak a lot about who they are. I didn’t like the games their grandmother played, even if she thought it for a good cause, and I didn’t like Jordan’s friend, Reese. There are quite a few twists to the story, not all good, and much of it with an undercurrent of anger, entitlement, furtiveness, and secrets.

The story involves family and friends, lots of talk about inventions and science, and runs the gamut of emotions. The story flowed nicely and there is nice closure that’s unexpected in its portrayal, as well as a happily-ever-after. An epilogue would have been the icing on the cake.

I look forward to reading the last book in the trilogy, THE AMERICAN DUKE, but alas it doesn’t come out until November.  A long time to wait for the next book!