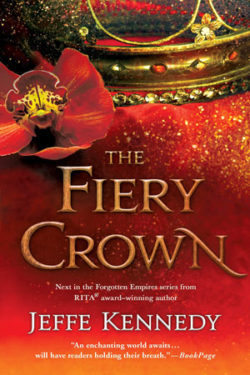 The Slave King and The Queen of Flowers are now married. However, Conri and Euthalia must learn how to navigate their new alliance. Conri intends to use everything at his disposal to kill the false emperor. Euthalia strives to keep Calanthe and its people safe from both Emperor Anure and Conri’s thirst for vengeance. With their loyalties torn, they agree on a trap to lure Anure out of hiding. What sacrifices are Conri and Euthalia willing to make? Is there a greater threat than just Anure?

Conri shows such remarkable growth, especially emotionally. As a slave, he had to learn how to bury his emotions enough to survive to live another day. I adore Conri’s natural protectiveness towards Euthalia. They may still be strangers, yet he stubbornly keeps to his word about keeping her safe, even from herself. What I like most about Conri is his view of marriage. He has vague memories of his parents’ marriage, but Conri remembers enough to know he wants a monogamous relationship with Euthalia.

Euthalia is also showing amazing character growth. She is used to making important decisions alone, so it takes her a while to trust Conri enough in the areas she is not knowledgeable on. I like how Euthalia refuses to allow her subjects to refer to Conri by his moniker. She knows how much he hates it and insists they refer to him by either his name or as consort. What I like most about Euthalia is how she can explore her personality around Conri. Whenever in his company, she discovers something new about her personality.

THE FIERY CROWN is book two in Jeffe Kennedy’s fantasy-romance series, FORGOTTEN EMPIRES. The story’s pacing is quicker and smoother than the previous one. It is important to read the prior book, THE ORCHID THRONE, to understand the characters’ development and the events happening in the story. I love how this book picks up immediately where the first one left off.

THE FIERY CROWN is a thrilling tale of two strong-willed souls discovering what is truly important to them. I cannot wait to read more about Conri and Euthalia’s crusade against Emperor Anure.