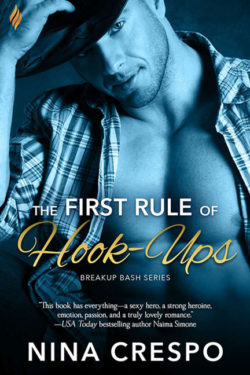 At only two hundred and twenty pages, THE FIRST RULE OF HOOK-UPS, BREAKUP BASH #1 was a quick read. It’s a hot and steamy romance with lots of heat-up-the-sheet moments for Alexa, who gets jilted on her wedding day (as we find out in the prologue.)

The story begins six months later, with Alexa and her two best friends attending a Breakup Bash party at Club Escapade, owned by none other than Rafe. Rafe used to be a Hot Body Hunk and performed under the name of Raphael the Dream Maker. His and Alexa’s paths had crossed at her bachelorette party, and neither have forgotten the other. When their paths cross again, Alexa goes after what she wants, and things only get hotter from there, especially when they make a no-strings-attached agreement.

There is a lot going on in their lives, much of it job-related. And Alexa might have plans to leave the state. Both characters have emotional issues, and they keep their feelings from each other. The story is filled with family and friends and a heartfelt romance.

I felt that the sex sometimes overshadowed the story, taking me away from the romance. There is better closure than I expected that takes place in the epilogue a year later. There are definitely more stories to tell, since Alexa’s two best friends kept concentrating on her and her love life, but there were hints that not all was well in their lives.

All in all a satisfying read, but not one of her best since we didn’t really get to know the characters as well as I’d hoped, and there were still so many unanswered questions, which I hope get answered in a future story.

Ms.Crespo is an author whom I have read before, including the two books in THE KINGMAN BROTHERS series, FORGET YOU and FIGHT FOR YOU. I hope to read more of her books but would prefer the steaminess gets dialed back a notch.