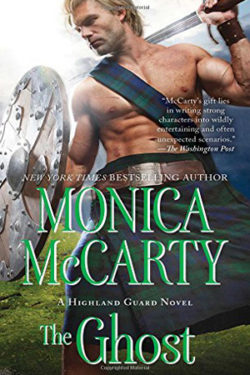 What do a spy and a traitor have in common? They both lack honesty! The latest and last chapter in the HIGHLAND GUARD series is a horrific, realistic account about the actual battle between the Scottish and the English. Ms. McCarty skillfully ties up the whole series with this final stirring novel starring Joan Comyn, daughter of prominent Isabella MacDuff and Sir Alex Seton, once an elite guard with Robert the Bruce’s celebrated Highland Guards. Trickery and seduction abound in this decidedly deceptive story. Alex Seton is an admirable, gallant and exceptionally handsome man. He seeks a diplomatic ending to the wars even though he is known as a traitor because he switched sides to the English. He now fights with principle and devotion for King Edward. Joan Comyn who is a very beautiful lass, is a secret agent. After witnessing, as a child, her mother being tortured by the English, Joan Comyn’s anger festers. Retaliating by becoming a spy for Robert the Bruce, Joan becomes known as the Ghost. She collects information on strategic English battle locations and gathers war intelligence by seducing English lords, which benefits the Scot’s war efforts. Always extremely careful in her undercover duties, Joan encounters deliciously handsome Sir Alex and her heart betrays her, beating rapidly in his presence. Knowing she needs to unearth vital clues for Robert the Bruce from Alex, she hesitates, lest her beating heart gives her away. Also, Alex is tasked with uncovering the spy who is leaking imperative information to the Scots. What a dilemma! What happens next?

Alex is a traitor and Joan is an undercover war spy, yet there is undeniable chemistry between them. Can they keep their attraction safe from prying eyes? Do they fall in love and discover they want more? Do they uncover more than they thought possible?

THE GHOST is over-the-top suspenseful, mesmerizing and emotionally rich. Many characters in the HIGHLAND GUARD series join forces in this story, combining into one spellbinding tour-de-force! Ms. McCarty beautifully ends the series with an astonishing, exciting conclusion, superbly wrapping up one of the finest historical romance sagas to hit the stands in ages. Sir Alex Seton is bold, brooding and brawny while Joan complements him in her own seductive, secretive way. I was totally impressed with Ms. McCarty’s in-depth research of the Scottish, English wars and history. I just love how the author weaves her own romantic stamp on the entire series, taking liberties by adding human depth and wit to each individual character, resulting in a distinctly rousing, eye-opening adventure! Kudos to Ms. McCarty! You will love THE GHOST! It is sharp, smooth and satisfyingly saucy!