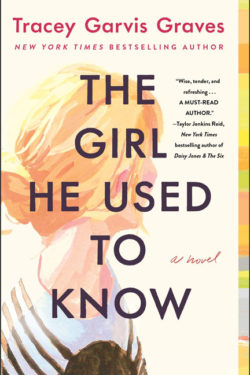 THE GIRL HE USED TO KNOW by Tracey Garvis Graves is a captivating second chance romance by a new-to-me author. Starring a unique heroine who is trying to fit her square life into a round hole—can she adapt enough to keep the man she loves?

I love it when a character is so uniquely different from the mainstream. Annika’s name is as unusual as she is, as well as her therapy sessions that reveal what she deals with daily. I also love a story that flows from what was before, to what is now, slowly revealing what happened to two people who seem drawn to one another in their past and present.

What pulled them apart?

Annika’s loneliness at college really tugged at my heart. Her inability to be understood made me sad for her, but her capacity to push forward made me admire her strength. Her relationship with Johnathon made me smile, wondering—is he the one?

Heartbreak was inevitable. Can they recover years later? I really liked Annika and Jonathan. Their romance is fraught with obstacles caused by things not within their control. Is it possible for someone like Annika to get past her issues and lead a normal, or as close to normal as possible, life?

Some things I enjoyed… There are some good family moments with holiday traditions. Annika is a librarian who has a soft spot for animals. Who doesn’t love someone who loves books and animals? Her rescue efforts showed a lot of her charm. Annika’s best friend, Janice, is another character I admired. She was key in Annika’s character development. This book fits the Contemporary New Adult category of romance the best, and although there are some funny moments, I wouldn’t consider it a romantic comedy.

The only thing that seemed off to me was that the end felt a bit rushed. I wanted more detail or an epilogue to satisfy my curiosity. But that’s really minor compared to my overall enjoyment of this book.

Not always fond of two timelines, but this one was beautifully done. It kept me riveted because I felt strongly something was going to happen. That unnerving feeling back and forth between timelines kept me reading.

The first reveal I suspected, but the second one took me by complete surprise. I felt it needed a black moment, but wow, I didn’t expect the one we got. So raw. So real. It shook the book for me.

I had already decided I really liked the hero and heroine early on, then their struggle to be together was superbly written. But I wasn’t convinced that they could hold their lives together— they needed something to stick them. Then the final chapters were so twisty that it made me appreciate the build-up to the black moment even more. Those final chapters are brilliant, but the best part? They’re the glue.

I’m thrilled that a publicist sent me the trade paperback edition for review. It wasn’t on my radar, but after receiving it, I realized this book was released last April in digital, hardcover, and audio. So, if you’re a paperback-preferred reader, this is your lucky day! The trade paperback edition is available, including at Target where it was chosen for their January Book Club pick.

If you love unusual characters with a great inner struggle, then I recommend this novel. THE GIRL HE USED TO KNOW is unique and captivating. It’s also a beautiful love story that sucked me in and spit me out in a tumble of emotions.