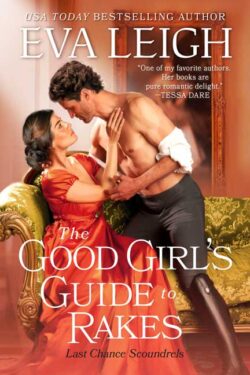 Kieran Ransome is the third son of an Earl. He, along with his brother and friend, must marry a respectable woman within a year or be financially cut off. Kieran turns to the one woman who can help him accomplish such a feat. Reluctantly, he agrees to Celeste’s astonishing terms. However, he never expects to lose his rakish heart to her. Can Kieran help Celeste escape an unwanted engagement? At what risks?

Miss Celeste Kilburn is the daughter of a dockyard magnate. She is society’s most respectable woman. Celeste tires of playing the good girl. She craves for a taste of adventure before becoming engaged to a pretentious Earl. She agrees to assist Kieran, only if he agrees to escort her around London’s immoral scenes. Can Celeste maintain her sterling reputation? Or will she willingly embrace Kieran’s wanton lifestyle?

Kieran is such a delectable bad boy. He is a man who does not care what other people think of him and his past times. Instead, he embraces them to the fullest. I absolutely hate how Kieran’s parents and elder brother treats him. It explains why he does such outrageous and naughty things. I adore Kieran’s protectiveness towards his other brother and fellow partner-in-crime. He despises how their parents and their peers malign Finn, especially in front of him. What I love the most about Kieran is how he encourages Celeste to be her own person. He does not try to curtail her as society and others do.

Celeste is such a remarkable young woman. She is tired of being the person society and others dictate her to be. I like how intuitive and observant Celeste is. She sees far more than what people are aware of. Plus, she knows when to use that information as a weapon. I admire Celeste’s altruism. She willingly sacrifices her own happiness to appease and protect both her father and brother. What I love the most about Celeste is how she wants to help the poor and working class better themselves. She does not try to hide her humble background, nor does she try to forget it. Instead, Celeste wants to use her new resources to give back to her old community.

THE GOOD GIRL’S GUIDE TO RAKES is book one in Eva Leigh’s historical romance series, LAST CHANCE SCOUNDRELS. I am new to this author’s works. The story’s synopsis is what tempted me to give this book a try. It did not disappoint. I will be checking out the author’s other series when I get the chance.

THE GOOD GIRL’S GUIDE TO RAKES is a captivating tale of two peoples’ adventures through society’s respectable and seedier sides, only to discover their true selves and love. I have a guess on who the author plans for Finn Ransome. I cannot wait for the next book and see if my guess is correct!