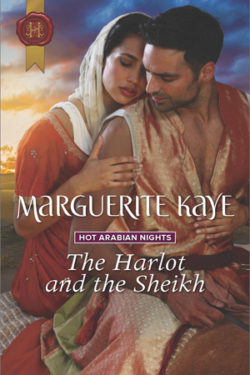 THE HARLOT AND THE SHEIKH, the third book in the HOT ARABIAN NIGHTS SERIES, does not disappoint. It was fast paced with beautiful descriptions that gave vivid detail to the clothing, the palace, the stables, and the lands.

Stephanie is part English and part Egyptian and seems well suited to Arabia, even speaking the language. She has to fight the prince to let her do what her father was hired to do–find out the source of the illness that is killing the prince’s thoroughbred horses. Will she be allowed to stay and perform the job of Royal Horse Surgeon, especially since Prince Rafiq wants to enter the Sabr (a special horse race) and reclaim the title for his people?

Stephanie and Rafiq are drawn to each other, and there’s a smoldering attraction between them. She has to keep reminding herself not to be so brazen. especially given her past. She’s also outspoken and tries to rein it in. but that’s one of the things the prince likes about her. She knows her business, and Rafiq is attracted to her knowledge but understands it will be difficult for his Master of the Horse, Jasim, to deal with a woman.

The interactions between Stephanie and Jasim were heart-wrenching, and he manages to turn others who have already learned to trust her against her. Rafiq’s deceased wife is mentioned throughout the story, and Stephanie helps him to come to grips with her death, especially when he unburdens himself to her.

The horses and their illnesses were front and center but so were Stephanie’s treatments pertaining to them. When she has some success, Jasim really doesn’t like it, and Rafiq is torn over which of them knows best. There is a lot of push and pull between the three of them, and things seem to go one way and then another. The story is full of the desert, the palace, and the Arabic culture. And especially the horses. There was nice closure and a happily ever after I appreciated, but an epilogue would have been nice. The cover of the book was beautifully done.

Kaye has fast become a favorite author of mine. I look forward to reading the fourth book in this series, CLAIMING HIS DESERT PRINCESS, and many others that she writes.