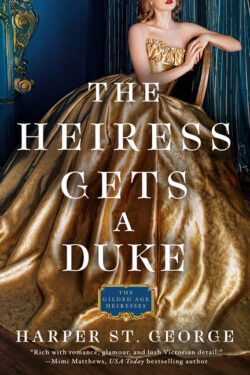 Love sometimes comes at a cost in Ms. George’s debut novel, THE HEIRESS GETS A DUKE, in The Gilded Age Heiresses series. The rich American Crenshaw family makes an entrance into the London scene. The father is owner of Crenshaw Iron Works, and with him are his wife and two lovely daughters, August and Violet. Marriage to a wealthy duke are in the parents’ plans and the youngest, Violet, is debuted at the ballroom dances in London. The daughters are horrified that their parents are concerned more with appearances than with their daughters’ wishes for their own futures. Do they snag an affluent duke?

The devilishly handsome Duke of Rothschild, Evan Sterling, approaches Mr. Crenshaw with his intentions towards Violet. Evan needs funds fast, as his dukedom is not solvent. After his beloved brother died, Evan stood to become heir. Then, his father passed away a year ago. Now he is heir and duke. Evan discovers his devious dad was irresponsible. The huge estate desperately needs repairs, and his twin sister’s debut season is coming up. More importantly, he needs money to pay the umpteen families he employs. Evan even fights in the ring to earn money. But wedding a wealthy heiress would solve his problems easier. Do the Crenshaw’s agree to his plans?

Although he intends to wed Violet, Evan is smitten with the heady beauty August. Do the parents consent to the duke’s intentions to marry her? But August isn’t concerned with wedlock one bit! She is content working. With her unorthodox pursuits, society deems her unfit marriage material. She defies her parents’ decision, miserable at the thought of marrying someone she doesn’t love. Evan also doesn’t want to wed so soon, but financially he has to. He has a tiger on his hands, trying to win August’s heart and trust. Will she wed or won’t she?

THE HEIRESS GETS A DUKE is first rate historical romance featuring a multidimensional heiress, a powerful duke, a vivid cast, and a sweeping drama. Ms. George delivers a tight plot, fine protagonists, and a perfectly hard won romance. The story is a sensual feast about the joys and pains of falling in love. August is stubborn, wanting to work, and Evan, destined to wed an heiress, secretly is not ready to. However, the winds of fate blow in and their destiny is changed. Ms. George breathes life into extraordinary characters, feisty August, roguish Evan, and everyone in-between. This is an emotional and an absorbing, tender plot that brought me to tears, so have a Kleenex nearby. THE HEIRESS GETS A DUKE is spellbinding, enchanting, and a grand love story!