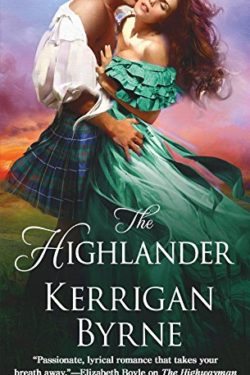 Philomena “Mena” St. Vincent assumes a new identity to escape her abusive husband. Liam MacKenzie is haunted by the sins of his past and the cruel father who had shaped him into the man known as the Demon Highlander. Will Philomena find safety with the Demon Highlander? Can Liam control the demon within to protect Mena from her abuser?

William “Liam” MacKenzie is the ninth laird of Clan MacKenzie of Wester Ross. He is known in England and Scotland as the “Demon Highlander,” due to his prowess in Her Majesty’s army. Liam beseeches his sister-in-law to send a suitable governess to help instruct his son and daughter. The new governess, however, is not what he is expecting. The captivating woman arouses not only his dark lust but other tumultuous emotions within him. Liam wants to learn the identity of the one responsible for causing the deep shadows in Mena’s beguiling eyes. Mysterious accidents crop up around him and endanger his loved ones. Liam’s torturous past rears up and threatens to tear asunder the tenuous happiness starting to bloom in Ravencroft Keep.

Philomena “Mena” St. Vincent is the mistreated wife of Lord Gordon St. Vincent, Viscount of Benchley. She escapes the abominable asylum her lord husband placed her in with the aid of two prominent members of London’s Underworld. To evade the authorities and her husband, Mena assumes a new identity and accepts a governess position in the Demon Highlander’s household. Liam MacKenzie both frightens and attracts her. A shadowy presence at Ravencroft Keep causes Mena to not only question her sanity but the growing pull she has to the MacKenzie laird. Mena dislikes deceiving Liam, but she fears the Demon Highlander’s infamous anger at discovering her necessary deception.

I adore and respect Liam for all the sacrifices he willingly made to spare his clan and loved ones from his father’s cruelty. I knew, going into this book, his childhood had not been an easy one. Learning of Liam’s origins also gave insight on Dorian Blackwell too, the hero from book one, THE HIGHWAYMAN. I could not help but empathize with Liam on his continuous inner battle not to become the same cruel man as his father. Liam never had a positive role model on how a father should act, but that did not stop him from doing his best to be a good fatherly figure to his son and daughter, sheltering them from some of the world’s ugliness. I adore the care he took with Mena on discovering the unmistakable signs of abuse, and how he wanted to use his primeval bloodthirst to make the one responsible pay. I like how he recognizes a kindred soul in Mena, and how she gives him a good reason to vanquish the inner demon that controlled him for most of his life.

What I like the most about Mena is the fact that she is not the usual small and dainty-figured heroine commonly found in romance books but a tall, full-figured woman with an amble bust. I am delighted that Philomena finally received her happily-ever-after, especially after her role in THE HUNTER. She, most of all, deserved to find a man who would treat her as if she was precious. It did turn my stomach to read how poorly Mena was mistreated by her husband and in-laws at the start of the book. However, I love that Scotland and the feared Demon Highlander helped Mena find the woman she had lost in her miserable five years of marriage. I like how England’s aristocracy and Scotland’s perception of a woman’s beauty and perfection differed, that Mena found a place to appreciate her stature.

THE HIGHLANDER is book three in Kerrigan Byrne’s historical series, VICTORIAN REBEL. I wanted this book since finishing THE HUNTER and was glad I received it to review. I am so happy to once again be reunited with both Christopher Argent and Dorian Blackwell. I love how the two blackguards came to Mena’s rescue, especially after the danger she went through to help them in the previous book.

THE HIGHLANDER is a heart-rending story of two abused souls finding not only solace from their painful past but uncomplicated love. I honestly did not want this book to end or to say goodbye to Liam, Mena, Dorian and Christopher Argent. I wonder who Kerrigan Byrne plans to pair up for the next book in this addicting series.