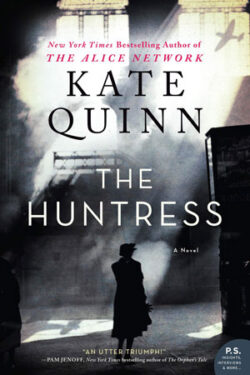 THE HUNTRESS by Kate Quinn is a historical romance set post World War II when Ian Graham, a war correspondent turned Nazi hunter, and his partner, Tony Rodomovsky, are on the trail of the Huntress, a cold-blooded Nazi murderer of children and Ian’s brother.

The chase begins in Vienna then moves to Boston where the Huntress has started a new life by marrying Jordan McBride’s father. Jordan is a wannabe photographer who becomes suspicious of her father’s new bride after her father dies in a hunting accident.

Ian’s wife, Nina, who was a Russian pilot during the war, joins Ian and Tony on the hunt. She was with Ian’s brother when he was murdered, and she’s the only person to have seen the Huntress and lived.

There are four love stories, two told in the past and two in the present. The love stories between Ian and Nina and Tony and Jordan give a satisfying happily ever after. A sweeping story of love, romance and intrigue. A real page turner that I couldn’t put down!