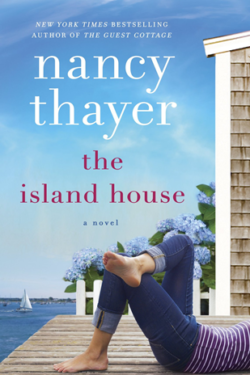 THE ISLAND HOUSE: A NOVEL by Nancy Thayer is definitely a beach read since it’s set on Nantucket in the summer with ocean breezes, beach parties, swimming, beaches, a small island and even whales!  But there is a darkness to it as well since the older son, Henry, a brilliant doctor is bipolar and Thayer shows us the effects of the illness on him and those around him and James and Christabel are involved in a serious accident that often pits one family against the other .

The Vickerey family is made up of dad, who is also known as Dr. V even by his children and mom, Susanna, who takes everyone under her wing and welcomes her “summer children” who are friends of her four kids and live with them most of each summer.  Henry, Robin, James and Iris each have their own issues and hangups but have a great outlook on life in Nantucket.  There is a warmth that permeates the family and is blanketed around the other characters as well  We learn of their greatest desires, their loves, their fears and even their secrets of which there are many.  The secrets are not only between family members but also with their many friends.

The summer children are woven throughout and we learn about their lives and loves too.  Courtney who is from Kansas, is always so grateful to be included by her college roommate, Robin, each summer.  She’s front and center in the story along with Valerie, Jacob, Callum and Pearl.  Quinn and his daughter Christabel live on the island year round but I found it hard to warm up to either of them. Quinn was an all knowing type and always wanted things his way and let those around him know it.  He also was thoughtless in some of his comments and jibes.  The characters have such a depth to them and their layers get pulled back a little at a time which makes it hard sometimes to see why some of them are friends.

It was nice to see the love and friendships that were shared and also long lasting.  As friends and couples came and went it cast a realism to the story of how love ebbs and flows.  The letting go of previous relationships and loves felt right.  It was nice to see many of the characters talk through their issues, wants and desires with others. The scenes with Robin and her whales were heartwarming if not dangerous but it was nice to see that some of her friends thought it was a reality and not a fantasy as others believed.  As people coupled up there was often a rightness to it even if it took awhile for them to each get to that point.  There is nice closure with some happily ever afters in the offing but an epilogue would have tied up some of the loose ends.

Nantucket is on my bucket list to visit along with several other places in that area.  Thayer is a new to me author reminiscent to me of Elin Hilderbrand, Susan Wiggs and Sherryl Woods.  I will definitely be adding her books to my always growing TBR pile!