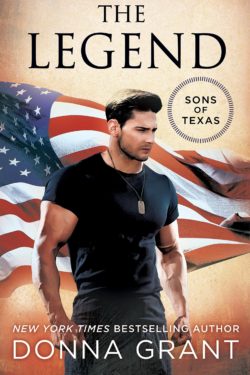 The fight with the Saints is far from over in Donna Grant’s THE LEGEND.

Delta Force Colonel Wyatt Loughman is the eldest Loughman brother. He and his brothers find themselves embroiled in a dire predicament while searching for their kidnapped father. Wyatt pairs up with Callie to locate his father’s whereabouts and to discover the Saint’s true intentions for Ragnarok. He fears for her welfare when the shadow organization includes Callie’s family and a terrorist group in the fight. Can Wyatt and Callie keep the dangerous bioweapon Ragnarok out of enemy hands? Can Callie convince Wyatt to forgive his father?

Callie Reed works as a computer analyst-slash-hacker for Whitehorse, a private ops team. She has no association with her drunken, criminal-orientated family. When her boss is kidnapped, Callie partners up with a man from her past to rescue him. She vows not to allow Wyatt Loughman back into her heart and repeat their history. Callie intercepts a message that warns them of yet another threat heading their way. She and Wyatt prepare to fight the Saints, her family, and a terrorist group called x. Will Callie succeed in unthawing Wyatt’s icy barriers for good?

Wyatt is the very epitome of the proverb “still water runs deep.” He is the type of guy who prefers to demonstrate his feelings through actions rather than vocalizing them. Wyatt is emotional and mentally scarred by his mother’s brutal murder. The tragedy of it has followed him into adulthood and caused him to close off his heart to everyone, including family. I adore the lengths Wyatt underwent to protect Callie from her criminal family. Yet, what I love the most about Wyatt is how he acknowledges and respects Callie’s strengths and skills. He may fear for her safety, but Wyatt knows Callie can handle herself without his assistance.

Callie is such a positive role model for women. She is a clever, independent woman who marches to her own tune. Callie demonstrates such inner strengths by refusing to follow in her family’s unlawful footsteps, but instead, she forages her own path despite their opposition. I admire Callie’s ability to recognize the family who accepts and loves her over the ones related by birth. I love Callie’s persistence in not giving up on helping Wyatt reconcile with his father Orrin.

THE LEGEND is book three in Donna Grant’s romantic-suspense series, SONS OF TEXAS. I have been impatiently waiting for this book since book one, THE HERO. I love how the younger Loughman brothers from the previous books and their heroines still play pivotal roles in this story. I like the secondary romance starting between the Loughman sire and his doctor savior.

THE LEGEND is an emotive-gripping story about letting go of emotional baggage to take a second chance at love. Donna Grant introduces new players into the game that promise more books to come in this series. I cannot wait to see which of the Loughman’s allies will be next to continue the fight against the Saints.