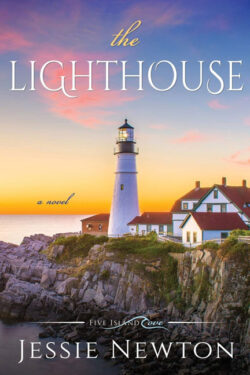 THE LIGHTHOUSE is women’s fiction and the first book in the FIVE ISLAND COVE series. There are complex, lifelong friendships among women who haven’t seen each other in a long time.

When Joel, the former lighthouse keeper and a beloved member of the community as well as Kristen’s husband, dies, some negative things about him come to light. His newly learned secrets have a profound effect not only on his widow, but also on her five good friends.

Robin still lives on the island. Alice, AJ, Eloise, and Kelli have all gone on with their lives, and their hometown of Diamond Island provides different memories for each of them. But they each have their own secrets as well. When Robin does her best to reunite them back on the island for Joel’s funeral, the effect isn’t what she might have expected.

This wasn’t the easy beach read I thought it was going to be. At times it was emotional, and there was a darkness to the story filled with secrets and family dysfunction. I did love how the women seemed to pick up where they left off and tried to be there for each other.  It was nice to see the interactions between some of the spouses and/or significant others as well as the children. There were quite a few twists to the story, which ended too abruptly with everyone heading back to their own lives once they left the island.

I read the first two chapters from the next book in the series, THE SUMMER SAND PACT, which was in the back of the book and it left me wanting more. It seems like it will segue nicely to the next stories being told. I look forward to reading it as well as the rest of the series and hope for better closure and more lightness.