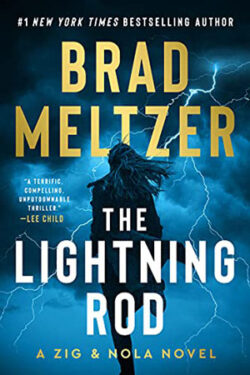 THE LIGHTNING ROD: A ZIG AND NOLA NOVEL by Brad Meltzer is book 2 in the Escape Artist series.

When army veteran Archie Mint is killed while trying to stop a robbery in his own home, his family is shattered.

Mortician Zig (Zigarowski) is called to work on Mint’s body before his funeral, and he discovers something he was never meant to see that leads him to Mint’s former top secret military unit and his connection to artist Nola Brown. Two years ago, Nola saved Zig’s life, and she’s as volatile and dangerous as a bolt of lightning.

Following Nola’s trail, Zig uncovers one of the U.S. government’s most intensely guarded secrets—an undisclosed military facility that dates back to the Cold War, and a hidden group that is willing to compromise the very safety and security of America.

There was a very minor love story between Zig and his ex-wife, but I’m rooting for them in the next book in the series because they clearly love each other despite the tragedy they’ve endured.

I couldn’t put this book down! The action kept me turning pages late into the night, but the end caught me by surprise.