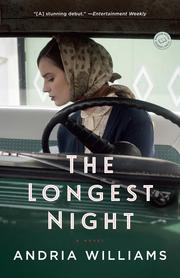 THE LONGEST NIGHT is historical fiction set in 1959 and 1960. It is based on a true nuclear reactor incident in Idaho.

Nat and Paul, a young military couple with two young daughters, are stationed in Idaho Falls. Paul works 50 miles away at a nuclear reactor which he soon discovers is failing. He is unable to share this information with his wife or anyone, per his commander. Nat and Paul have difficulties in their marriage.

Nat is a stay-at-home-mom and lonesome. The author makes you feel Nat’s loneliness and boredom.  She finds it hard to make friends in the small town of Idaho Falls. When Paul pushes his boss about the dire situation with the failing reactor, Paul is sent to the Artic to work on a reactor there for six months.

Nat is befriended by a local rancher, Esrom, and is comforted by his kindness toward her and the children. She enjoys his company and loves him as a friend. She also learns gossip and nosy women and neighbors could be her downfall.

The author portrays the military community very well. She nails the time period. A time when most families had only one car and the wife would have to ask to borrow it for the day. No seat belts, no car seats, everyone wore aprons to cook, and would change to dress up aprons for company. Women wore mostly dresses and some wore high heels every day at home. Children could play in a patch of mud without anyone freaking out about germs. Almost everyone smoked. Coke Cola came in bottles and mac and cheese was a staple. Little girls wore dresses every day, and on Sunday, hats. It was a trip down memory lane, as I was a child during that time period.

When the nuclear reactor fails, Paul follows the fire trucks to the site. He is exposed to radiation as he tries to rescue the injured workers, and he is placed in isolation because of his exposure. Right before he is taken away, he talks to Esrom, who is now working as a fire fighter, and asks him to take Nat and the children out of town till it is deemed safe to return.

Esrom goes to Nat’s house and tells her what Paul wants him to do. She is grateful, but doesn’t go with Esrom, instead she sends her children away with him.

Nat waits at the house till Paul comes home. This was a great sacrifice on both their parts. Paul knew of Esrom and Nat’s friendship, but thought there was more to it. Yet, he loved her and the girls enough to send them off with Esrom. Nat finally realized she loves Paul and wants to be there for him when he is released.

There were so many different elements to this story, but it worked well and flowed nicely.

There are two love stories in this book. One– how the love in a marriage evolves over time, and the trials of keeping a marriage together under harsh circumstances. Two– the unconditional love of friendship.

This was a great read.