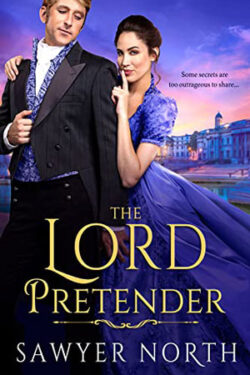 Emma Watts is the daughter of a disgraced baron. She vows vengeance on the group responsible for her late father’s fall from grace. Emma intends to find incriminating dirt on the members of the Promethean, a gentlemen’s club that caters to nobility. The first person on her list is Simon Pike, the Earl of Blackburn. However, a fateful encounter with Simon, and a thunderstorm, gives Emma the advantage she needs. She soon discovers there is more to him than she originally thought. Can Emma let go of her need for revenge? Or will she lose far more than what she anticipated?

Simon Pike is an important member of the infamous Promethean club. He volunteers to learn the identity of the woman hellbent on ruining his club brethren and bring her to justice. Simon knows the harm a cunning and devious woman can do unimpeded. However, his chance meetings with a mysterious lady causes his opinions to waver. An unexpected accident allows Simon to walk in his spirited adversary’s shoes. Can Simon dissuade Emma from her vengeance? Or will he willingly help her bring about the Promethean’s demise?

Emma is a fascinating character. She is an unfortunate young woman who has experienced the worst thing that could happen to a noblewoman. I admire Emma’s determination not to be a damsel-in-distress, despite her family’s social standing. She knows there will be no knight, or lord, coming to their rescue nor does she expect one. What I love the most about Emma is her temerity to stand up to Simon’s mother. She is not afraid to put the dowager countess in her place.

Simon is a nice change-of-pace from the usual arrogant, alpha, and entitled nobleman in the genre. He struggles a bit to balance the two sides of his nature, until he finally realizes it is okay to be different. I adore Simon’s closeness with his young niece. She is the only female that he could openly be himself with without fear of repercussion or emotional harm. Simon also shielded her from his mother’s cold indifference. What I admire the most about Simon is his acceptance and admiration of Emma’s intelligence. He did not feel intimidated or belittled by her fiery wit or spirited demeanor, unlike most men of his status.

THE LORD PRETENDER is the first book in Sawyer North’s historical romance series, RED LION LADIES. This is my first time reading this author’s works. I have not read many (if any) romance novels written by a man, so I could not wait to give this story a try. I like the paranormal element Sawyer North weaves into the story. It is one that I have not really experienced before in the genre or book form, just in movies. The story reminded me a little of the movie IT’S A BOY GIRL THING but in a regency setting.

THE LORD PRETENDER is a delightful tale of two people forced into an unusual situation that changes their preconceived perceptions. I cannot wait to see which resident of Red Lion Square is next!