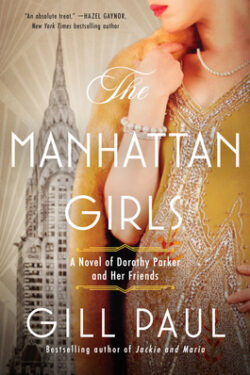 THE MANHATTAN GIRLS is about a diverse group of best friends all determined to make their mark on life. The story is aglow with sparks of wit and romance in 1920’s Manhattan, during the prohibition era, as four women, Dorothy Parker, Jane Grant, Winifred Lenihan and Peggy Leech meet at the Algonquin Hotel and become close friends. They are there for each other through thick and thin.

Dorothy, an unsteady, witty lady, suffers two failed suicide attempts and publishes a book of poems. Jane Grant and her husband start The New Yorker magazine with support from her best friends. The girls rally and cheer on lovely Winifred Lenihan when she lands a top act in a Broadway show directed by George Bernard Shaw. They also help jolly, Peggy Leech become a published author. They introduce her to a man who later becomes her husband named Ralph Pulitzer.

There is intrigue, seduction, blackmail, gossip, romance, a likable cast of characters, and spectacular scenes set among smokey bars and speakeasies in New York with food and booze galore. Each chapter alternates between the four ladies as told from their perspective. Romance ebbs and flows with abundant drama. Do each of the ladies achieve their lofty goals? There is also something sinister afoot. What is lurking in the shadows?

THE MANHATTAN GIRLS is a simply divine tale lavishly woven against the New York city night life in the 1920’s. Four influential women, Dorothy, Jane, Winifred, and Peggy, who are best friends, delve into their inner lives and support each other though life’s battles. You will laugh and cry as they each tell their life stories as they struggle through many problems, mental and physical. The author brilliantly depicts factual tidbits of each lady, their love conquests, the actors they meet, directors, gangsters and various prestigious people during the prohibition era. I loved the gossipy banter and the love the women have for each other. It’s refreshing to see how they have each other’s backs. I absolutely enjoyed the muggy, dark, and dank atmosphere of New York. It made all the difference to this stylish story. THE MANHATTAN GIRLS is like a Southern comfort old fashioned. A classic, smooth cocktail!