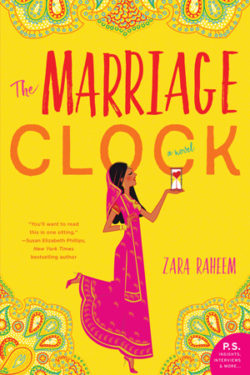 There is a theory that every woman is equipped with a biological clock that starts to tick when they reach the age of getting married and having children. While some people ignore that clock, others are forced to acknowledge it; such is the case with the lead character in THE MARRIAGE CLOCK.

Leila Abid has it all: good friends, a satisfying job as an English teacher, and two parents who love her. However, for her traditional Indian parents, her life will not be complete until she finds a husband.

At the ripe age of 26, she is considered an “old maid” in her culture, and the lack of prospects are seen as a parental failure. Determined to bring honor to their family, her mother parades every eligible engineer, doctor, and professional Muslim she can find, regardless of what Leila wants or whom she is attracted to.

After her mother’s failed attempts, Leila takes matters into her own hands and is given three months to find a suitable husband. She travels the world of online dating, speed dating, and the occasional ambush from her well-meaning mother. Through it all, she tries to figure out what exactly she wants and what will bring her happiness.

Leila’s disastrous dates and interactions with the opposite sex are wildly entertaining and are the main catalyst for this book being a page-turner. When she makes a list of the qualities she’s looking for in a man, some readers may be able to relate to the idea of crafting a perfect mate.

The ending was a little abrupt and while some readers will be satisfied, others, like me, may look for a more detailed idea of what her romantic future will look like.