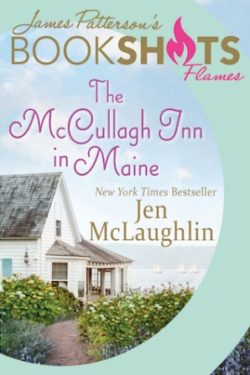 THE MCCULLAGH INN IN MAINE (MCCULLAGH INN #1) was a super fast read at only one hundred and sixty pages.  Not only that, but it’s part of James Patterson’s Bookshots Flames books which are supposed to be read in a few hours and it was – less than two for me!  I look forward to reading more of the books from Bookshots if this is the caliber of writing.

Chelsea O’Kane comes from a family of crime and tried to get away as fast and as far as she could.  She became a lawyer in Miami after leaving Maine upon graduating from college.  When she returns to Maine, due to lots of trouble she got herself into in Miami, she doesn’t expect to meet up with her old friend, Jeremy Holland, who sticks to her like glue, hoping to rekindle what they once shared. She thinks he’s an accountant since she’s stalked him on the internet to get information on him a few times over the years.  But everything is not as it seems for either of them, since they are secretive about their lives,  as they work together to remodel the inn left to her by her aunt.

There are family and friends, secrets, lies, shoot ’em ups, evil, anger, fear, tears, laughter and happiness along with loving and love.  The descriptions of the inn are vivid and made me feel that I was there. Jeremy and Chelsea have a history and are trying to recapture it or are they?  Her brother Paul is trying to help her stay alive but gets severely injured in the process after being attacked.  While Paul and Chelsea are trying to piece their lives back together, Jeremy isn’t helping with his secrets.  When everything comes out will Chelsea still be on the run or be able to settle down at the inn that’s starting to feel like a home?  There is some closure but enough loose ends that will take us to the next book in the series, A WEDDING IN MAINE.

McLaughlin is a new to me author and I look forward to adding many of her books to my always growing TBR pile. I can’t wait to read book two in THE MCCULLAGH INN SERIES, A WEDDING IN MAINE,  and can’t believe it won’t be out until 2017!