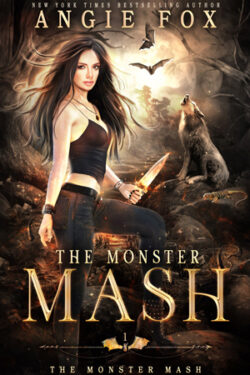 Dr. Petra Robichaud is one of the few paranormal surgeons left in Orleans Parish. She gets conscripted into the New Gods Army until the war ends. Petra’s ability to see the dead could earn her a death sentence. She unwittingly uses her gift to save an immortal commander during surgery. Now the hot-as-sin demigod pesters Petra about an ancient prophecy. Is Petra the savior the prophecy foretold? Can she put her faith in it and Galen?

Commander Galen of Delphi is a demi-god. He is the leader of the Green Hawk Special Forces team in the New Gods Army. Galen finds himself on Dr. Robichaud’s operating table in critical condition. After she saves his life, he is certain Petra is the healer foreseen in the prophecy. Galen needs to persuade the doctor to help him put an end to the war. Can Galen convince Petra to play her intended part? What sacrifice will he have to make?

Petra is such a fun heroine. She makes the most of her situation in Limbo. I understand and empathize with Petra’s reluctance to play her predestined role. She had already caused irreversible harm to people with her good intentions, so she does not want to repeat her past mistake. What I like the most about Petra is her relationship with her two bunkmates. She tries to respect their privacy, which sometimes is difficult. Also, Petra tries to be there for her werewolf comrade when he’s homesick.

Galen is such a dreamboat! I adore the fact that he is not egotistical. Galen never once behaved entitled, as if his rank as a commander and demi-god earned him special privileges or treatment. Instead, he put other peoples’ feelings and needs before his own. What I love the most about Galen is his treatment of Petra. He willingly gave her space when she needed it, but he never lost faith that she was beneficial in ending a senseless war.

THE MONSTER MASH is book one in Angie Fox’s comedic paranormal-romance series, THE MONSTER MASH. I first read this story in 2012 when St. Martin’s Press released it. Angie Fox has received the rights back on it, and she has tweaked and revamped the story before re-releasing it. I am so glad the story is just as funny as I remember it to be.

THE MONSTER MASH is a paranormal take on a classic television series. I would dearly love to see someone pick this series up and put it on the big screen. I cannot wait to see what is next for Petra and Galen.