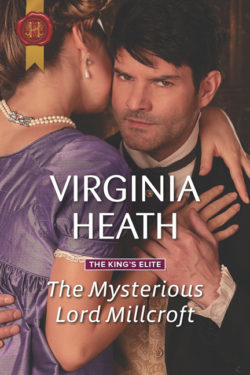 THE MYSTERIOUS LORD MILLCROFT is the first book in the KING’S ELITE miniseries. It has characters we’ve met before from the WILD WARRINER series, and it was great to get to know them better.

Seb, a spy for the Crown and part of the King’s Elite, is front and center and leads us on some merry chases. Lady Clarissa Beaumont, Gem, is keen on marrying a duke until Seb enters the picture. Although they never seem to be on the same page at the same time, it was fun to watch their interactions since neither is what they seem. Both characters have a depth to them that we learn about a little at a time.

THE MYSTERIOUS LORD MILLCROFT is filled with intrigue, secrets, nobility and unsavory characters along with family and friends. The romance was well done, with a few steamy moments as well. There is a nice flow to the story and some closure, though I personally prefer a little more. I look forward to reading the next book in the series and hope the story resumes where we left off.

Ms. Heath has fast become one of my favorite authors of Regency romance. I always look forward to reading what she writes.