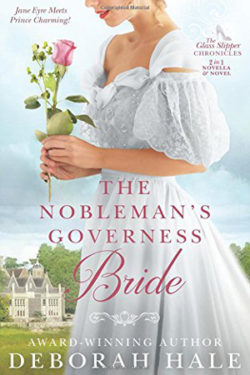 THE NOBLEMAN’S GOVERNESS BRIDE by Deborah Hale is an enchanting duology of two Christian romances from THE GLASS SLIPPER CHRONICLES series. This series features several girls who became acquainted when they attended a school for daughters of deceased clergy. The school was a horrible place to grow up, and now these friends are out on their own. In this book, two of them become governesses and meet the loves of their lives while taking care of children for wealthy families.

I love these types of stories that feature friends made in an orphanage type of setting. Each young lady has a story to tell and obstacles to overcome. As adults, they’re tied to one another through their horrible experiences at the school, but also by being thrust into society without each other’s support. This makes their reunion extra special when it happens, so I hope we see more of that as the series continues.

Both books were published previously for the Love Inspired Line with Harlequin Books S.A. in an altered version in the Glass Slipper Brides series. This book is the author’s reissue with a new cover.

THE VISCOUNT MEETS HIS MATCH

The first novella is the shorter of the two stories. I recall my Kindle logging around thirty-five percent of the book when I started the second story. THE VISCOUNT MEETS HIS MATCH begins in The Cotswolds, England, in 1814.

When Rebecca Beaton is mistaken as her charge, Hermione, by the young lady’s fiancé’s brother, she doesn’t deny or confirm who she is. Sebastian Stanhope, Viscount Benedict, tries to reason with Rebecca, but he doesn’t give her a chance to say one word. He rambles on with his assumption, hoping to get her to withdraw from his brother’s proposal, while Rebecca sees nothing but humor in the situation. Later, she realizes she should have been more honest with him, but the man was just so sure of himself.

Sebastian’s brother, Claude, is furious when he finds out what transpired, not realizing at first that his brother spoke to the wrong woman. Once he figures it out, he sees the humor in the situation as well. Sebastian is fully irritated at the woman who bested him and is prepared to take her to task for it. Nineteen-year-old Hermione is offended that the man could mistake her older governess as her, but Rebecca explains that Sebastian isn’t paying attention to details. He just wants one thing. To remove his brother’s fiancée from their future.

The mistaken identity sets the stage while entertaining the reader. Although Sebastian takes himself quite seriously, it’s obvious that Rebecca will not. Claude and Hermione are determined to wed. Sebastian thinks he will have an ally in Rebecca. They all spend more time together without the results becoming what Sebastian imagines. But that’s okay, because he gets exactly what he didn’t know he wanted or needed.

A very fun story, THE VISCOUNT MEETS HIS MATCH gifts us with a dual romance of two brothers who fall for a lady and her governess. I especially enjoyed Rebecca and Sebastian’s story, based loosely on CINDERELLA, because they’re an older couple and more relatable to me. I could easily picture their conversations, and their friendship came before love. It made me particularly happy that Rebecca and Hermione wouldn’t be separated because they fell in love with brothers.

This second story is much longer, closer to a full-size novel, so the plot and content are more developed to match the length. It begins in Berkshire, England, in 1815, with Grace Ellerby on the way to meet her potential employer.

It’s not a normal situation. Grace has never heard of a governess sitting for an interview prior to today, but she needs the position, so she’s willing to do something outside of normal. Assuming she’s meeting a married man, Grace is surprised to learn that Lord Steadwell is a widower with three young daughters in need of guidance. Grace is also hiding from her past, keeping her beauty secret by wearing a bonnet and her father’s spectacles.

Lord Steadwell prefers a plain governess since their last one eloped with a man from town. Grace has fled her last three positions because of unwanted attentions from men. She intends to hide her beauty to avoid uninvited interest, something she has always had to worry about. Lord Steadwell and Grace will both get what they want, if Grace’s disguise stays in place. Of course, the three young girls challenge Grace and her cover. Lord Steadwell can’t help but be impressed with his governess when she handles his daughters with love. Will she break down the wall of sorrow he has built around his heart?

This is a slow-moving romance with a lot of time spent with Grace and the three girls. They’re adorable and experiencing problems expected after losing their mother and their previous governess. Grace doesn’t have an easy time of it, but she’s experienced and determined. Her kindness is eventually reciprocated when the girls love her as much as she loves them.

Rupert has grieved the loss of his dear wife for three years. He knows he should find a mother for his girls and feels a governess is the best place to start. Realizing his widowed neighbor has a son and needs of her own, Rupert begins to court her. But his daughters don’t approve and beg Grace to intervene. Grace has spent some time with Rupert and has begun to have feelings for him. Can she put them aside to be the best governess, or will fate intercede?

THE BARON’S GOVERNESS BRIDE is a beautiful rendition of CINDERELLA. I love a retelling of this fairy tale, and Deborah Hale adds just the right twists to make the story fully her own. There was a point when fears seemed to be rehashed too much and I wanted to rush to the end. But the sneaky author wasn’t quite done with her characters yet. I agree with the time taken in the end because it made this couple’s union more believable. A bonus to this novel is reuniting with Rebecca and Sebastian from THE VISCOUNT MEETS HIS MATCH contained in the same package.

Deborah Hale is one of my favorite authors for several reasons. I like how she uses my preferred tropes and twists them. Her tightly-woven stories keep me riveted, even without a lot of action. The characters’ dialogue is often clever with a reason to be there, complementing the scene. I can just relax, knowing I’m guaranteed a fun journey to a well-deserved happy-ever-after. I’m not left wishing for more or less description, or wondering who is talking to whom, because her dialogue tagging is seamless, often including an action so I can envision the story as it happens in my mind. I’ve always been fascinated by her methods, so I keep coming back for more.

Even though Regency is not one of my favorite styles of historical romance, I’ve had this series on my wish-list for some time. Because I never worry about time periods when I read a Deborah Hale novel – I just read them because she wrote them. This time, she adds in some lovely, soft inspirational edges to her characters’ beliefs without being overdone. Two tales with heart, faith, and love introduce what promises to be an enjoyable series. If you enjoy a chaste romance where friendship begins a forever love, you’ll love THE NOBLEMAN’S GOVERNESS BRIDE, getting two tales for less than the price of one.