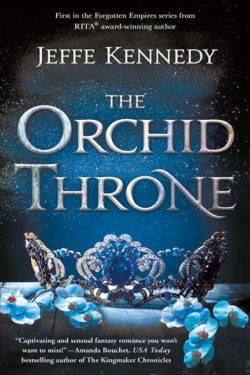 Conri is the sole surviving member of Oriel’s royal house. He escapes slavery and forms a rebellion against the man responsible for his family and their kingdom’s destruction. To successfully overthrow the usurper’s tyranny, Conri has to possess the legendary Abiding Ring. He needs to marry the ring’s current owner in order to achieve his goal. Queen Euthalia proves to be a difficult woman to court. Can Conri convince Euthalia to join his cause against the usurper emperor? Or will she be his doom?

Queen Euthalia is the monarch of Calanthe, an island kingdom that is the last free nation in the world. She receives prophetic dreams that herald trouble for her peaceful realm. Euthalia orchestrates a dangerous courtship game with the emperor in hopes of staving off their nuptials. When Emperor Anure orders her to capture Conri, she accepts to protect Calanthe from the tyrant’s wrath. She never expects to find the scarred man fascinating. Will Euthalia risk everything to ally with Conri? Or will she side with the emperor?

Conri is such an amazing and inspirational character. He miraculously survives the destruction of his kingdom, his family’s deaths, and his enslavement without losing his humanity. Instead, Conri channels years of abuse, hatred, and indignation to fuel his determination to overthrow the usurper. I like how he no longer sees himself as a prince but a man honed by his years as a slave. Conri harbors no grand schemes of restoring his kingdom or his birthright. What I love the most about Conri is how he wants to win Euthalia with his own merits instead of relying on his royal lineage.

I like the uniqueness of Euthalia’s name and wonder how it’s pronounced. There were moments in the book where she did annoy me, mostly her demeanor towards certain things. I admire how Euthalia always put Calanthe and its people first. Every decision she made was to keep her kingdom from suffering the same fate as the rest of the world. What I like the most about Euthalia is her craftiness in forestalling her nuptials to the tyrant Anure. She did not wait around for someone to save her but devised ways to stave off the inevitable.

THE ORCHID THRONE is book one in Jeffe Kennedy’s new fantasy-romance series, FORGOTTEN EMPIRES. The world is not associated or connected to the author’s THE TWELVE KINGDOM series’ world. The story starts out slow; however, the slow pacing allows the author to set up the realm’s groundwork. I adore the secondary character Ambrose, especially his eccentric personality. He made me laugh several times throughout the book.

THE ORCHID THRONE is an engaging tale of two people who are shaped by their circumstances and come together to face the same enemy. I like how this fantasy world, especially their magic, differs and stands out from other stories in the genre. I cannot wait to read about Euthalia and Conri’s united stance against the usurper emperor.