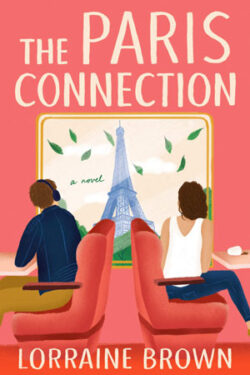 Bubbly and savory, THE PARIS CONNECTION is a story about happenstance in the city of love. Riding on a train late at night, Hannah and her boyfriend, Simon, are on their way to Amsterdam, to help out with Simon’s sister’s wedding. Only, things don’t go as planned. When Hannah changes seats in the middle of the night so she can sleep, it is one disaster after another, as the train separates while she’s sleeping. Hannah goes on to Paris and Simon goes to Amsterdam as planned. When she wakes up, horror sinks in when she finds herself in the wrong city! With no luggage, change of clothes or money, what will she do?

Leo, a strikingly handsome Frenchman, is stranded also with Hannah and blames her on his quandary. Although, he is very compassionate and encourages Hannah to join him sightseeing while stuck in Paris until their next train departs. Hannah strikes a deal, since he is a complete stranger, to only go so far, so they don’t miss their next train. Leo fondly takes Hannah to different famous sights in Paris and they eat many delicious treats. Slowly, inch by inch, Leo creeps into Hannah’s heart. She is startled, realizing that maybe Simon is all wrong for her. Leo brings out a nice side in her. Plus, she’s never had so much fun and enjoyed another man’s company more than Leo’s. Leo is shocked to realize how attracted he is to Hannah and doesn’t want their day to end. What happens when they finally reach their intended destinations?

A pretty girl unexpectedly gets a chance at finding real, unfiltered love in THE PARIS CONNECTION. A missed connection, missteps, laughs, heartfelt dreams and love, occur in Ms. Brown’s delightful new story. Fate deals Hannah a surprising day full of annoying and delightful events. How she deals with it is another matter. Leo, the exasperating Frenchman, lessens the harsh, unexpected events with his sparkling charm and stunning good looks. Hannah’s heart fills with warmth and love for the crazy, fun guy! Do they fall in love? Will Hannah go back to Simon? What happens to Leo? THE PARIS CONNECTION is a tasty treat filled with warmth and romance, as anything can and will happen in the city of love!