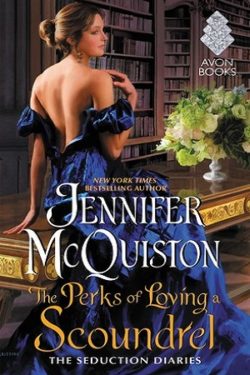 I have a soft spot for heroines who always have their noses stuck in a book, so I immediately fell in love with Mary Channing, the main character of Jennifer McQuinston’s THE PERKS OF LOVING A SCOUNDREL. Since most of Mary’s books have taught her that women are likely to be ruined, married to a villain, or killed, Mary is content to lead a safe, boring existence. She’s come to London to spend time with her pregnant sister, and plans to stay inside the house and read. But despite all Mary’s plans to avoid adventure, she finds it almost immediately when a wrong turn lands her in the arms of Geoffrey Westmore, a notorious scoundrel, who immediately attempts to seduce her. But when the pair—while in a very compromising position—overhear an assassination plot, it’s no longer only her ruin that Mary needs to worry about.

I was surprised by the twists in the story, and loved that it wasn’t formulaic at all. The romantic tension was balanced well with the more thrilling parts of the plot, and they complemented each other. Part of the novel’s strength is that neither Mary nor Westmore can ever be truly honest with the other, as they are not fully honest with themselves—and their misunderstandings are not only fun to read, but feel true to contemporary relationships and not at all contrived.

This is the best part of McQuinston’s novel: how realistic it feels. Individually, both characters are complex and true to life. When Mary faints, it’s not because the situation is overwhelming, as it appears—it’s because her corset is borrowed and too darn tight. There is more to Mary than a simple fear of her books becoming reality—she is afraid to fully live, because she has experienced the heartbreak that life can bring. But her tenacity is compelling—she is determined to solve the assassination plot, and her ruin becomes a secondary issue. She is a flawed character, whose actions often undercut her thoughts.

Westmore’s actions are defined by his traumatic past, and he suffers from PTSD. He cares about the assassination plot—the problem is, he’s such a known joker that no authorities will believe him. And at the same time, he is struggling to come to terms with what he’s done to Mary’s reputation. It’s comical to read as the two of them argue over which is more important: Mary’s ruin, or a potential assassination. Westmore’s confusion over her insistence that they catch the killers is laugh-out-loud funny.

The way the adventure unfolds rings true to the reader as well. Mary’s only experience with murderous plots comes from books. We get to read, with pleasure, as Mary learns that running from a villain, holding a gun, and other dangerous tasks are never as smooth and exciting as they are described in a novel.

As I read, I was perfectly torn between wanting to identify the assassins, and waiting for the explosion of the sexual chemistry between Mary and Westmore. Both events are well worth the wait! I loved watching the characters grow together and heal from their pasts. If you like your historical romance with a dash of adventure, I highly recommend THE PERKS OF LOVING A SCOUNDREL. Now I’m off to read the other books in The Seduction Diaries series…