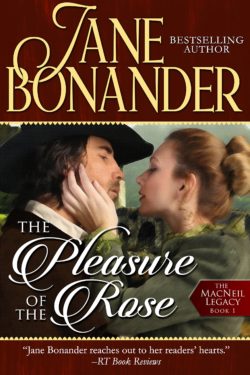 The solicitor’s sister, Rosalyn Geddes, is the castle’s housekeeper and a widow. After losing her daughter in a tragic accident, she has no wish to become another man’s wife and pawn. Unfortunately, or conveniently, while caring for the new duke during his illness, Rosalyn is mistaken for someone else and they consummate a relationship without really knowing one another. Since the duke needs an heir and Rosalyn was compromised, she is the likely choice to become his wife.

I love Native American and Scottish historical stories, so this combination naturally caught my eye. Although the concept is plausible, the implementation didn’t convince me most of the time. Fletcher seemed to be a caricature of a Native American, often called a savage by everyone, including his wife. He didn’t seem to mind, but that went along with his easygoing personality.

Fletcher comes across as crass in the beginning chapters so I was curious how the author would redeem him. He’s caught in bed with another man’s wife and ends up accused of rape and murder. Of course, Fletcher doesn’t have much choice but to escape when he has a chance to begin a new life in Scotland. His one redeeming quality at that point is that he refuses to go with the solicitor unless he promises to find his three missing siblings and bring them to Scotland. Fletcher has been supporting his siblings and his grandfather with his army pay, so the reader knows he’s not uncaring.

The angst created by some of the plot points is resolved rather quickly with an explanation. Those plot points were why I kept reading, so I felt let down when they weren’t shown but were told. There’s substance to this novel that I enjoyed, but it felt glossed over. I wanted the characters’ relationship to be more thoroughly fleshed out and that wasn’t possible when they seemed to spend so much time apart.

Fletcher does redeem himself in the way he treats those who live on his land. The former duke was cruel, so Fletcher fixes what’s broke and improves his tenants’ lives. He’s kind to his wife and gives her time to love him. He’s not perfect, but he tries to improve their relationship. Fletcher’s siblings set the stage for what I assume will be future books.

A good concept for a series, THE PLEASURE OF THE ROSE introduces characters who long for two countries. I’m curious whether the future books in THE MACNEIL LEGACY series will spend more time in America or Scotland, or a mixture of both.