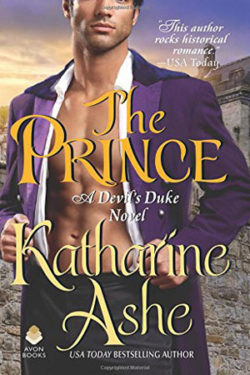 THE PRINCE by Katharine Ashe, is a very different historical story. It deals with the prejudice of society and the scientists not allowing women to become physicians. I enjoyed parts of this book, but not all of it.

Elizabeth (Libby) Shaw wants to follow in the footsteps of her father, and be a surgeon. When her father leaves Edinburgh and goes to London for an extended stay, she sees this as an opportunity to go to medical school. Incognito, of course.

Since women aren’t allowed in medical school, she assumes a male identity. She dresses  as a young man and calls herself Joseph Smart. While attending a school function an artist she had met before recognizes her and follows her.

Ziyaeddi Mirza, a mid-eastern Prince in exile, supports him self by painting portraits.

Ibrahim (the name Ziyaeddi is going by in exile) confronts Libby and threatens to expose her unless she lets him paint her. She makes a deal with him, that he allow her to board at his house as Joseph Smart, and in exchange she will sit for an hour per week as a model.

He lost part of his leg during his escape from his homeland and is in constant pain. He works on Libby’s portrait every Sunday. They get to know each other during this hour each week. When Libby finally gets to see the portrait that she sat for dressed as a woman, she is surprised to see Ibrahim has painted her as Joseph Smart. (This made no sense to me. Why would he paint her as a man? I didn’t feel the author explained this action.)

Through her study of medicine, Libby is able to make a prosthetic leg for Ibrahim. Her kindness touches his heart. Libby seems to be on the autism spectrum scale with tendencies towards OCD, or so it seems when she has an episode. When she has a bad episode, Ibrahim helps her through it.

I’m not sure, but I don’t think the implied OCD is something one gets rid of.

This book does have it all. A dangerous subplot, a hot and cold romance, tempers, passion and heroine and hero who have their secrets lives exposed. Libby and Ibrahim have many obstacles to overcome to reach their HEA.

Like I said at the beginning, I liked some parts of this book and some parts, not so much. The writing of course is excellent. And the historical facts the book is based on are very interesting. For instance, there was an Irish woman, Margaret  Buckley, who dressed as a man to become a doctor. She called herself Dr. James Barry. That was in 1809.