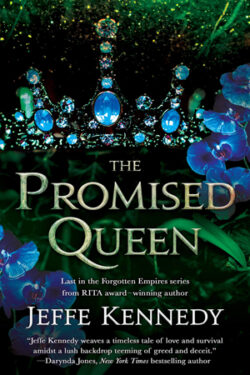 Conri, the Slave King, has successfully completed half of the prophecy by claiming the hand that wears the Abiding Ring. He rescues his wife and returns her back to her island home. Conri must devise a plan to defeat the false emperor and his wizards. Can Conri complete the second half of the prophecy? Will he give up his need for vengeance? But at what cost?

Euthalia (Lia), the Queen of Flowers, returns to Calanthe a changed woman. Her brief time as a captive has opened her eyes to the world’s plight. She must come to terms with her true nature before she can assist Conri in defeating Anure. What role will Lia play in the upcoming battle? Will her magic be enough? And will she have to give Conri up?

Conri has shown significant growth throughout the trilogy. He finally learns that his reckless nature has dire consequences, especially for his friends and family. I admire Conri’s willingness to step up and temporary assume the monarchy role in his wife’s absence. He knows how much Calanthe means to Lia, so he wants to resolve some of the island’s problems until her return. What I love the most about Conri is his refusal to let Lia push him away. He knows that he had messed up, but he tries to rectify it. Also, Conri sticks close to give Lia everything she needs to recover.

Lia also shows incredible growth. She no longer tries to conceal or hide her supernatural side but embraces it. I like that Lia flounders a bit with self-doubt and uncertainty. It shows that she is not infallible or perfect. I love the positive influence Lia has on Conri. She helps him explore other options when vengeance clouds his thinking. What I adore the most about Lia is her ability to see and acknowledge Conri’s strengths and skills. She does not let him downcast his person or his abilities.

THE PROMISED QUEEN is book three in Jeffe Kennedy’s fantasy-romance series, FORGOTTEN EMPIRES. It is prudent to read the previous two books in the series to fully understand the world, its troubles, and the characters’ personal growth. The story picks up where the prior one left off. This series stands apart from the author’s other works.

THE PROMISED QUEEN is the exciting conclusion to a spellbinding trilogy. I have really enjoyed Conri and Lia’s exploits. I am sad to see this magical series come to an end.