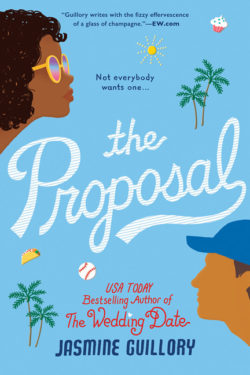 THE PROPOSAL was a quick read and had lots of laugh out loud moments along with some sad and scary ones too. Carlos and his sister, Angela, appeared in the author’s debut novel, THE WEDDING DATE.

Nik meets Carlos and Angela at a baseball game where Nik receives an unexpected proposal on the Jumbotron. Her actor boyfriend of five months, who she’s not even sure she likes anymore, takes her completely by surprise. When she says no, all hell breaks loose, and she’s left to stare down camera crews alone. Carlos and Angela come to her rescue, and it’s a fun read from there. Watching Nik and Carlos flirt and have feelings for each other was playful, and their chemistry is off-the-charts. Neither is looking for anything long-term or permanent, but things don’t always pan out the way they expect.

Nik is African American; Carlos is Latino. Carlos’s family is involved in the story, as are Nik’s two best friends since college. The main characters get each other from the first and are comfortable revealing things to each other that they’ve never talked about before. The story is filled with family, medical talk, romance, and humor. The plot flows smoothly and has a terrific happily ever after or two.

I’ve read both of Ms. Guillory’s books and look forward to reading more. I hope she continues the connected stories since Nik has more friends who need their stories told.