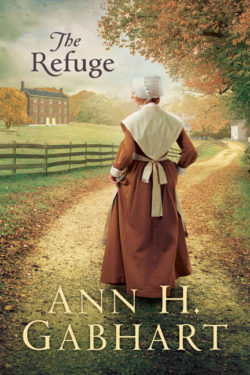 THE REFUGE by Ann H. Gabhart is the perfect title to describe the Shakers’ generosity in this novel.

Darcie Goodwin sought refuge from cholera with her husband, Walter. When Walter is killed in a riverboat accident, Darcie is even more grateful for the shelter provided by the Shaker community. But what will they do when they find out she’s pregnant?

You see, the Shaker way of life doesn’t condone matrimony, shunning it as a sin. There are no pregnant women or babies even though there are children, many without mothers or fathers. They live peacefully in a community where the women and men stay apart. The “sisters” and “brothers,” as they call themselves, live harmoniously apart, coming together for meals and services, but in their designated sections, not to intermingle in conversation or seating arrangements. The Shakers work hard, both physically and mentally, with their faith as their guide.

I didn’t know anything about the Shakers historically, except the style of furniture I’ve admired, prior to reading this book. Their beliefs surprised me, but sound very much like our religious cults of today. Although they believe in Jesus, their founder, Mother Ann, taught that they were preparing for the second coming of Christ. They had no need to procreate but instead concentrated on preparing the perfect place, mind, body, and spirit for the second coming. They gave up all worldliness to become one body of worship and servitude.

Darcie and her husband weren’t true believers and had planned to leave once the cholera threat was past. It was thought that cholera passed through unclean air, something that hadn’t occurred within the Shaker community due to their partiality to cleanliness.

We meet Widower Flynn Keller next, along with his daughter and father-in-law, who live outside the Shaker community. Flynn offers his expertise on horses in regards to a problem horse, which is how he meets Darcie and many of the Shaker sisters and brothers. This book is their story and how their lives intertwine.

The novel takes place in 1850, when living on a farm with your family was a struggle. There weren’t enough hands to do all the chores, even more noticeable if one or more family members got sick. A community where everyone shares the work and the fruit of their labor appeals to those in need.

The Shakers didn’t force people to stay with them. They could leave whenever they wanted, with whatever they brought with them. Even though they gave up their worldly possessions when they joined, they could get them back if they decided to leave. Coming back wasn’t a problem either, they would be forgiven and accepted into the fold.

It was fear of the unknown and living life all alone without means to support themselves that held Darcy and many like her within the Shakers’ care.

The book focuses mostly on the sisters’ lives and we meet very few of the brothers. There are some colorful characters who don’t abide by all the rules so easily. I found the novel’s progress to be a slow pace, even though I cared about the outcome of the individuals I got to know. I felt they were taking forever to make a decision to get out, or stay, biding their time without motivation. I also felt I needed more details at the end for a couple of the characters. Yes, their story had a conclusion, but they were such a big part of the book that I wanted to know more in the end.

I expected more romance since this is listed on Amazon as Historical Christian Romance in the top selling category. But this square peg doesn’t fit in a round hole. It has many nuances, including romance elements, but it’s not typical of most historical romances. That’s not a bad thing for this story. It works the way it is, but some romance readers may expect the romance to be center stage, and it’s not. Darcy does spend a lot of time in her head wondering about her situation, but she doesn’t do anything about it until she’s forced to make a decision. The women’s friendships are in the forefront, and they’re what pulled out emotion in me as I read their stories.

THE REFUGE is about families and how much they’ll sacrifice to survive. There are some sad stories as well as some about those who triumph over adversity. But mostly, the book is about women supporting women, no matter their choices. It’s about forgiveness and acceptance.

THE REFUGE is best described as believable and inspirational Christian Historical Women’s Fiction with some romance elements. It’s filled with religious believers, including the characters who are not Shaker. It’s about faith differences and how friends cope with the unfamiliar. The Shakers give up a lot for their faith, work hard, and pray often. You may not agree with their choices, but you can’t deny their obedience or sincerity.

I never did figure out which territory this book takes place in, but it seems true to the year historically. This is the eighth book in the author’s Shaker series, but I’m not sure if they’re connected. The only thing I felt was missing is where is this community of Shakers? Either I missed it, or it’s assumed you’ve read the previous books. I didn’t know this book was part of a series while I read it, so I didn’t notice I was missing anything until I wanted to include the place in my review.

New-to-me author Ann H. Gabhart convinced me I need to take a look at her backlist. I’m still on the fence about the Shakers. They seem like loving people, but their faith took a twisty-turn outside of the bible. You can’t fault their faith or intentions, but if they continue this path of celibacy, they’ll inevitably become extinct. I don’t think they thought of the future, that the second coming may take more than a lifetime. It’s why I’m not sure I’ll want to read more Shaker stories. I can’t imagine a romance happening inside the community, so it would seem to me that all the stories would all be about leaving it. If nothing else, these Shakers really made me think about faith in general.

Gabhart has a special talent for writing a faith-filled novel that isn’t preachy or condescending. It’s the kind of faith-based novel I enjoy reading. There are lessons that evoke questions. The characters aren’t perfect, even some who believe fully in the Shaker religion bend the rules and seek forgiveness.

What I liked best about THE REFUGE was that the characters took me on a faith-filled journey full of obstacles, while looking for their happy-for-now conclusion. Isn’t that what we all want? Happy-for-now with no worries about the future, knowing that “we’ve got this” together as loving friends and family?