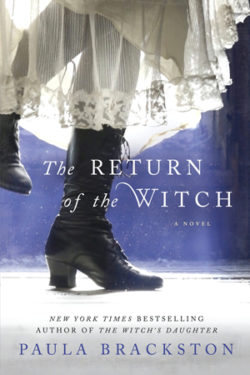 Elizabeth Hawksmith is the heroine from the first book and is a hedge witch. She has been in Summerlands for the last five years keeping an eye on the evil warlock, Gideon, who tried to take her life. When Gideon gains his freedom, as no one else has ever been able to do, Elizabeth realizes she must return to her homeland to protect Tegan who has become like a daughter to her.

In the five years since Elizabeth had to leave, Tegan has transitioned from a frightened young apprentice witch, to a world traveled and learned one with more magic and witchcraft learned from the best. Tegan is surprised to see Elizabeth return and then she finds out that Gideon has returned as well to try and capture Tegan. The two witches have only been together for a short time when Tegan disappears and Elizabeth knows that Gideon has her. Elizabeth swears she will chase them to the ends of the earth rescue Tegan.

This story takes the characters throughout history while witch pursues warlock. THE RETURN OF THE WITCH is the sequel to THE WITCH’S DAUGHTER, which first brought us the remarkable heroine and captivating story all wrapped up in an eye-catching package. This story brings back all the great characters and adds a few new ones to the mix.

I give this novel 5 Hearts at Romance Junkies because as much as I love stories of witches and their history, I have never found an author like Paula Brackston to tell the stories that keep you on the edge of your seat until the very end.