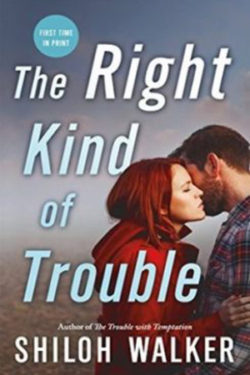 The RIGHT KIND OF TROUBLE is the third in the McKays series.

Moira McKay and Gideon Marshall have a long history together. They had a disastrous split at a young age and while Gideon visibly pined over her, Moira seemed to have moved on–married and divorced. Twenty years later Gideon is finally finished letting Moira hurt him and has decided he’s ready to move on and do everything possible to forget her. Unfortunately, someone has been lurking in the shadows and threatening the McKay siblings. When Moira is attacked and Gideon gets the call, he admits he’s been lying to himself. She’s burrowed so deep inside of him, he’ll never be free of her.

The chemistry that’s been sizzling between Moira and Gideon since book one finally comes to a head when Moira realizes she’s lost him. She just had to hope that wanting and needing him is enough to make him stay and give her one more chance. For his part, Gideon’s never been able to tell Moira no, but after years of being kicked in the teeth he figures he’s got one more chance in him to spare.

These two take combustible chemistry to a whole new level, and it was absolutely worth waiting for! The final entry in the McKays series is loaded with suspense, action, and wonderfully supportive cast of secondary characters. Walker also wraps up the ongoing mystery of who’s been attacking the McKay siblings in a satisfying and deft manner.