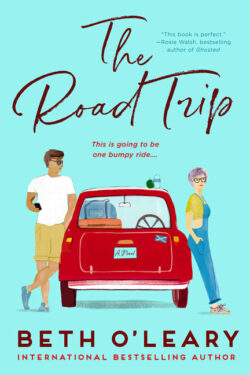 THE ROAD TRIP took a while for me to get into it. It’s very dry and has British humor and some British phrases which slowed it down for me. The story is told in alternating chapters by Addie or Dylan, and some of the story is prefaced as Then or Now. A lot of back and forth between past and present also made it difficult to get into, but we do learn about the main character’s pasts, when they unexpectedly met and became lovers in Provence. As the story begins, they are ex-lovers with baggage.

The story does pick up, however, and has some laugh-out-loud moments due to the unexpectedness of their road trip. Addie and her sister are traveling from England to Scotland along with another wedding guest, who they had met online on the wedding blog.  Things take a drastic turn when they get in a car accident with Dylan and his friend, causing them to all squeeze into one vehicle to get to their friend’s wedding.

On the way, we learn about the characters dealing with depression, dysfunction, and chaos when Dylan’s friend tries to come between him and Addie. Though some of the characters leave a lot to be desired, there are lovely descriptions of the wedding venue and the villa in Provence.

This is a second chance at love story. And it’s filled with friends reconnecting and dealing with their own issues as well as building relationships. Will Addie and Dylan’s feelings from several years before be enough to get them back on track? THE ROAD TRIP delivers closure and a lovely ending, though it came off as a bit abrupt to me.

THE ROAD TRIP is an enjoyable read that takes some time to get going, and the characters have some real issues to handle before finding their happily-ever-after.