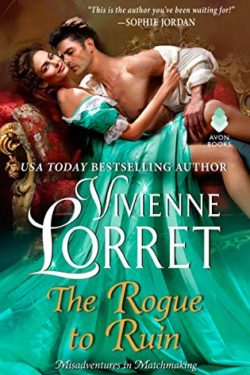 THE ROUGE TO RUIN by Vivienne Lorret, is the third book in “The Misadventures in Matchmaking” Series.

Not one ball in this Regency! Ainsley Bourne is on the shelf and runs a matchmaking agency with her sisters. When Ainsley’s ex-fiancé attacks her, the sister’s guardian, their Uncle, moves them to a new location across from a gaming hell.

From the moment they arrive at their new location Ainsley is in a snit about the gaming hell and all the noise and traffic up and down the street all night long.

Reed Sterling is the owner of Strerling’s gaming hell. Reed had once been a prize fighter and had earned enough money to open the gaming hell.

Ainsley and Reed engage in a feud. She tries many mean things to try and disrupt his business. He on the other hand, he meets this aggressive behavior with kindness. He is intelligent, kind and witty.

They both seem to have a sort of love hate relationship, her more than him. Ainsley secretly loves his strength and rugged good looks and kindness. But can’t find it in her heart to overlook the gaming hell.

When Ainsley’s ex shows up and threatens her, Reed is there and she says they are engaged in hopes of discouraging her ex.

Reed begins seriously courting her and she resists. He is quite persistent and there are some hot and heavy kissing scenes.

It was a different sort of Regency. The story was a little slow in places. I enjoyed most of it.