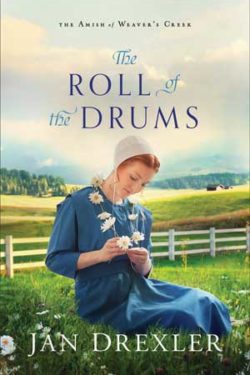 THE ROLL OF THE DRUMS is the second book in THE AMISH OF WEAVER’S CREEK series, and it’s a lovely Amish story reminiscent to me of books by Amy Lillard and Rachel J. Good, among others. I have not yet read the first book in the series, THE SOUND OF DISTANT THUNDER, but there was enough back story given so as not to feel lost.

The book is set in Ohio in 1863, and there is some darkness to the story due to illness and the tragedy of the Civil War and its effect on several families. But the core of the Amish faith shines through, especially when there are others to guide them. This is Ruby’s story, which included stories of her past as well as the shame she feels for some of her prior actions.

When Gideon and his family cross paths with her family at their farm, Gideon thinks they will be there just a few days for the horses to rest and his ill wife to get back some of her strength. When they stay longer than expected, Ruby and his wife become friends even though Lovinia is bed-ridden. Ruby and her mom help care for Gideon and Lovinia’s four children, and it’s heartwarming how deep the friendship grows.

There is a nice flow to the story and vivid descriptions of the setting and day to day of the Amish. The church and the Amish beliefs play a strong role in the story. There are many plots going on, though the story does revolve mostly around Ruby. There is a lovely romance portrayed, and the teaser at the end of the book gives a hint of what’s to come.  A very satisfying read and a book and author I definitely recommend.

Ms. Drexler is a new-to-me author, and I look forward to reading more of her books and not just in this series.