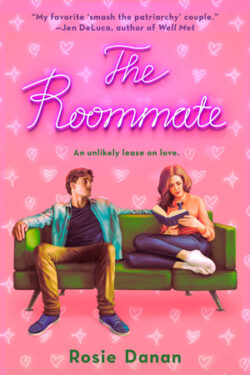 THE ROOMMATE was a quick and steamy read that held my interest from the first page to the last. There was a playfulness to the characters, which the cover cleverly shows.

Clara is a wealthy socialite who gives up everything on the east coast to spend the summer with a friend in LA whom she’s loved from afar for years. But when he ditches her to go on tour with his band, things don’t go as planned. He’s rented out the house to a guy who answered an ad on Craigslist. When she and her unexpected roommate, Josh, first meet, sparks fly while both try to make the best of the situation.

Josh has an interesting job as an adult entertainer. He is only renting for the summer since he broke up with his girlfriend, who happens to be in the same line of work, and they star together often. It’s enlightening to see how Josh teaches Clara everything she wants to know about sex since they go into partnership together with Naomi on tutorial films. They sometimes have problems communicating, but they both listen to the other and get to know each other well in a relatively short span of time.

The story is filled with emotion, a lot of laughter, and a romance that feels real. Clara gets to know an aunt who left the family fold many years ago to make her own mark on the world. She takes Clara under her wing, and they take on some important work with some interesting twists.

There is more depth to the characters than I expected and a good flow to the story.  I look forward to reading the sequel, THE INTIMACY EXPERIMENT, which is due out next year.

This is a debut book by Ms. Danan, who first released it last year with the title, NEVER HAVE I EVER.  I look forward to reading more of her books.