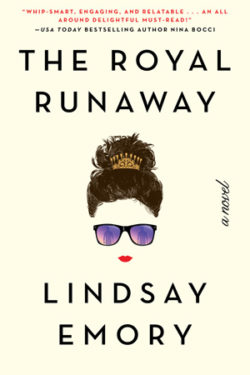 THE ROYAL RUNAWAY is screaming with excitement! The Princess of Drieden, Theodora, a gorgeous girl with vivacious verve, is dumped, as in exit, stage right, on her wedding day. The nerve of her fiancé! Angry and humiliated, she is stumped by Christian’s actions. She is whisked away to recover for four months. She returns to the castle and is obliged to proceed with her royal duties, press appearances, public services and mundane castle affairs. She isn’t sleeping well and desperately seeks a change of atmosphere. Thea slips unnoticed out of the castle, past security and heads to a local bar. She relishes living life normally, but can she?

Nick, a dashing, sly fox and a Scotsman, spies Thea across the noisy bar. He walks over to her and makes small talk. Coincidentally, Thea finds out he is related to her fiancé. Nick claims he is looking for his brother. Thea smells something fishy and it isn’t the bar. Nick requires Thea’s help and isn’t afraid to fib to get the goods. In his profession, that is the name of the game. Only, Thea is confused and doesn’t know what to believe. Did her fiancé selfishly abandon her, as she originally thought? After talking with Nick, did something sinister happen instead? Now, she’s in a web of danger, along with an attractive, enigmatic man too. Life never goes according to plan.

Intrigue, sabotage, treachery and an unforeseen romance intermingle into a story of deceit in THE ROYAL RUNAWAY. Theodora, Princess of Drieden, is stunned after being stood up on the day of her royal wedding. She spends months picking up the pieces. Then, her life is turned upside down, when by happenstance she meets her fiancé’s brother, Nick, at a local pub. He insinuates that devious forces are to blame for his brother’s disappearance. Thea is speechless and, bam, her life goes haywire.

Together they unearth a scandal so huge, it could collapse the monarchy. Ms. Emory writes a story with brass, brains and brawn that is unbelievably frightening that I was blown away by the story which has many subplots. This slightly off-kilter fairytale is a crackling mix of suspense and escapades, which felt like the rush of a runaway roller coaster. To offset the chilling atmosphere, the author cleverly mixes in romantic and comic relief. Pay close attention from the start, everything happens for a reason. Ms. Emory is a gifted writer, because I could not put this book down! Does Thea ever get her own fairytale ending? THE ROYAL RUNAWAY is paced as swift as a speeding bullet, showcasing evocative action and an edgy romance. Absolutely killer!