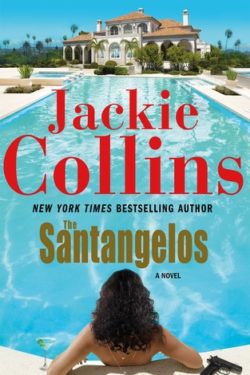 Lucky Santangelo is a strong, beautiful, and passionate woman. She comes from a long line of powerful and focused Santantelos and has made a true name for herself. She has run several successful businesses and currently runs a series of hotels in the heart of Las Vegas. She knows how to run a business and she didn’t get to this stage in her life without being cunning, ruthless, and street-smart.

The only thing she loves more than her business is her family. Lucky cares for her family deeply and will go to great lengths in order to keep them safe. Being a Santangelo, however, means being part of a notorious heritage. They have plenty of enemies. Lucky has had to avenge her family more than once and will go to her grave with the secrets she carries on what she has done to punish those who dare to cross a Santangelo. So when her beloved father, Gino, is brutally shot in the back of the head execution-style, Lucky is completely devastated and on the warpath. She will stop at nothing to find out who cruelly murdered her father and will make them pay for that costly mistake.

As she investigates, her son, Bobby, is busy opening a new club in Chicago. Lured to a hotel late one night by a mysterious siren, Bobby wakes up and finds himself in his car and in the middle of a murder investigation. Lucky smells a rat, but is unable to find a connection between her father’s murder and the murder of the mysterious call girl hired to frame Bobby. In the meantime, she has a funeral to arrange and unbeknownst to her, that will be the day her unknown enemy plans to unleash his revenge for the murder of his son. Lucky will pay for what she has done to his own family. An eye for an eye.

Jackie Collins knows Hollywood, sex, and scandal. Her stories are glamorous and deliciously suspenseful. Lucky Santangelo has popped up in her stories time and time again and never fails to show just how ruthless a Santangelo can be when crossed. THE SANTANGELOS wraps up a legacy of a powerful family, a loving family, and a family that will do anything to protect and avenge themselves.