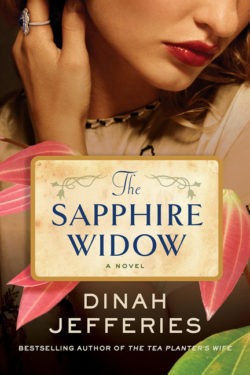 THE SAPPHIRE WIDOW is a historical fiction novel set in the 1930’s in Ceylon. There are vivid descriptions of the town, the sea, the cinnamon plantation, and the Print House, which made me feel like I was there. The characters were well developed and had a depth to them, but I didn’t find myself emotionally involved since some of the characters were hard for me to like. Many of the characters were flawed in some way, and there were a lot of secrets.

Louisa thinks she’s happily married to Elliot even though she has yet to give him a child. She’s had several miscarriages and given birth to a stillborn daughter. Elliot is always out of town or at the cinnamon plantation on business ventures and needs more and more funds from her father’s business or from her. Elliot also seems to have the time to sail with one of his friends, who always remains in the background. The plantation owner, Leo, plays a prominent role in the story, adding to the depth of characters.

Louisa’s father had bad vibes about Elliot when they first met. Once she and Elliot married, her father gave him a role in his business to help his daughter. When things go terribly wrong, no one seems to doubt what they learn.

The plot is choppy at times and didn’t have the flow I was expecting. There’s a lingering undercurrent of deceit throughout this story filled with personal and business relationships. THE SAPPHIRE WIDOW ends with some closure, which takes place two months later. But I was still left wanting more. There are some happily-ever-afters though, which satisfied.

Ms. Jefferies is a new-to-me author, and I plan to read some of her other books.