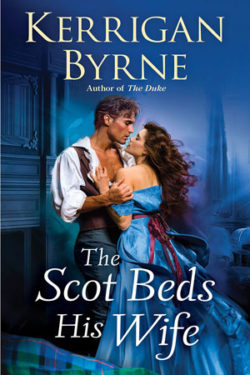 Gavin St. James, Earl of Thorne, is the younger and legitimate half-brother to the formidable Demon Highlander. He is renowned for his carnal exploits. Gavin plans to emancipate himself and Inverthorne from the MacKenzie clan. To gain this aim, he needs to procure the rich pasturelands that border his land. A foul-mouthed, gun-toting harridan, however, stands in his way. Gavin tries everything from seduction to coercion to gain Erradale. Will he tame the infuriating Sam enough to gain Erradale? Dare he open his fragile and battered heart to the spitfire?

American-born Samantha Master agrees to assume a San Franciscan socialite’s identity in Scotland. She flees to the wilds of the Highlands to escape her deceased husband’s outlaw brothers. Samantha promises the real Allison Ross to keep Erradale out of MacKenzie hands. Gavin harangues her at every turn to sell, but she refuses to let his pretty face or threats sway her from settling permanently on Allison’s property. When Samantha’s troubles from America catch up with her, she has no other alternative than to rely on the attractive rogue’s help. Will Samantha reveal her true identity before her lies are exposed?

I am so delighted the author revisited the tortured MacKenzie brothers. I have a soft spot for all three, especially after learning the cruelty each one endured from their abusive father’s hand.  I understand Gavin’s need to separate himself and his holdings from the MacKenzies. I admire his temerity into not becoming a monster like his father. What I love the most is Gavin’s open appreciation of Samantha’s feisty uniqueness. I like how he does not want to be attracted to a cursing, gun-slinging spitfire, but he respects Sam for her individuality.

I adore everything about Samantha! She fits every criterion I want in my heroines. I cannot remember the last time I felt this way about a fictional character. She’s strong-willed, sassy, and not afraid to face any challenge head on. I admire Samantha’s refusal to repeat her past mistakes, namely being swept away by another bad boy type with a handsome face. I also like her mettle to not only stand up against Gavin but to withstand the Demon Highlander’s dark intensity. What I love the most about Sam is her foul mouth and the men’s reaction to the coarseness of her language.

THE SCOT BEDS HIS WIFE is book five in Kerrigan Byrne’s historical romance series, VICTORIAN REBELS. I love revisiting Liam and Mena from book three, THE HIGHLANDER. I only wish Dorian and Farah from book one, THE HIGHWAYMAN, made an appearance in this book rather than the former being mentioned a couple of times. I truly miss them.

THE SCOT BEDS HIS WIFE is a captivating story of two broken souls finding solace together from their nightmarish past. I am antsy for the next installment, eagerly anticipating more about the enigmatic connection between the elusive Room and the infamous Blackheart of Ben More.