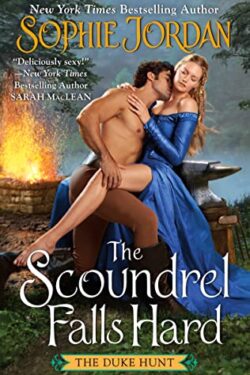 Gwen Gully is a third-generation blacksmith to oversee her family’s forge. Her business is slowly dwindling because a new blacksmith moved into her village. Gwen intervenes to save a fugitive from her community’s angry wrath. She soon finds herself tied to the handsome swindler. Gwen suggests a marriage of convenience for a year. However, she finds it difficult to stick to their original arrangement. Can Gwen save her floundering business? Or will she be forced to accept her rival’s distasteful proposition?

Kellan Fox is a con artist. He reluctantly assists his father in the man’s latest scheme, only to be caught by the townspeople. Kellan’s savior arrives in the guise of a tall and striking female blacksmith. When she saves him from the noose, he agrees to a marriage of convenience. However, Kellan finds that he cannot keep his hands off Gwen. Will Kellan turn a new leaf? Will he choose domesticity over his former life? Can Kellan help Gwen save her blacksmith business?

Gwen is such an admirable woman. She is a woman comfortable working in a male-dominated profession. Gwen knows she is just as capable as a man, despite the public’s outdated and chauvinistic views on a woman’s place. I love how Gwen refuses to let people’s opinions bother or sway her. She has accepted her differences from other women. Gwen acknowledges her strengths and her weaknesses. What I admire the most about Gwen is her selflessness. She willingly risks her livelihood and reputation for a stranger.

Kellan is such a swoon-worthy, redeemable bad boy. The fraudulent lifestyle is the only one he has ever known. I like how Kellan has his own code of conduct. He may be a swindler and thief, but there are certain people he deems off limits. Also, Kellan often gives his ill-gotten gains to the needy. What I adore the most about Kellan is his protectiveness towards Gwen. He hates when others bully or mistreat her because of her height and profession.

THE SCOUNDREL FALLS HARD is the third book in Sophie Jordan’s historical romance series, THE DUKE HUNT. The story can easily stand alone. There is no on-going plot. I like that Imogen, the heroine from book one, THE DUKE GOES DOWN, does make a couple appearances. I do have a few little nitpicks. I feel that the break in at Gwen’s forge went unresolved. My other nitpick is that Silas and Mercy, the couple from book two, THE RAKE GETS RAVISHED, never appear in the book. They are my favorite couple.

THE SCOUNDREL FALLS HARD is an enjoyable tale of two lonely souls forced into close proximity, only to learn to trust and love each other. I have this suspicion that the next book will be about the new duke and his housekeeper. I cannot wait to see if my assumption is correct!